Sam and Guy (from Green Eggs and Ham) 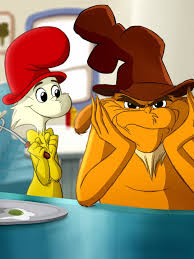 Description: Sam will help everyone love green eggs and ham and fight the creeps but Guy will try to help I guess
Quote: Sam: “Will you try them here or there” Guy: “I will not eat them anywhere, I do not like them Sam I Am”
Trial Team: Blue
Stars: 1
Entrance: Sam will walk in excitedly carrying his suitcase, while Guy follows behind though he doesn’t look very happy as he carry’s his suitcase
Victory: Sam will shoot confetti out of his hat into Guys face by accident
Death: Guy will face palm while Sam will disappear by jumping into his hat
Role: Frontline Damage

Basic attack: Sam will stab the enemy with a fork

White skill: Will You Try Them
Sam pull out a platter of green eggs and ham, making Sam and Guy invincible for 15 seconds along with increasing they’re attack for 15 seconds. While in this state Sam and Guy will also give all allies a 30% chance to have there basic attacks deal true damage for for the rest of the wave

Green skill: Chickerafe Head Butt: Fantastic Damage
Sam will open his suitcase causing the Chickerafe’s head to pop out and head butt the closest enemy, dealing X damage and knocking them back along with making them more likely to be dealt true damage by allies effected by “Will You Try Them”

Blue skill: Perfect Disguise
Guy and Sam will swap hats, making them invisible for 10 seconds and giving them X energy over 5 seconds

Purple skill: Inventor Of The Zook
If an ally KOs an enemy with True Damage, Sam and Guy will gain X energy

Red skill: Here Or There
Sam and Guy will also gain the affects from “Will You Try Them”

Sam and Guy and Colette
Disk: New Culinary Treats
Sam and Guy will gain X energy when they KO an enemy with True Damage
Colette has never heard of Green Eggs and Ham so Sam decides to show her more foods that his mom made for him
Allies: Swedish Chef Linguine and Remy Bunsen and Beaker

Sam and Guy and Hiro
Disk: Failed Observation
Guy and Sam will be energized after “Perfect Disguise” is used
Guy try’s to get tips on inventing from Hiro
Allies: Baymax Rockateer Fred