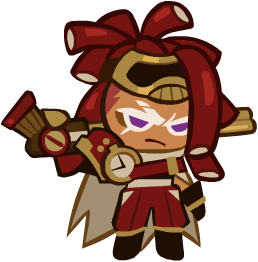 “I don’t have time for this”
An agent of the Time Balance Department from the future, String Gummy Cookie uses his String Gummy Blaster to tie up anyone who considers messing with the timeline.

Shoots all enemies 9 times with his String Gummy Blaster, Dealing damage over time for 9 seconds. While enemies are dealt damage over time, a rampant clockbot attacks from behind the backmost enemy, dealing X damage and decreasing their armor by X

Purple Skill: Time is over
Whenever Rampant Clockbot is active, instead he shoots 5 more times and damage over time to all enemies for extra 5 seconds