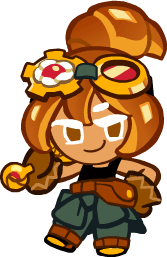 “Absolutely no one must mess with the timeline!”

An agent of the Time Balance Department, Croissant Cookie is ready to board on her timecraft and repair any Enemy time rifts.

Role: Support
Position: Front
Trial Team: Red
Entrance: Dropped off by her timecraft
Victory: Throws up her wrench and catches it and winks
Defeat: Falls on knees
Attack: Throws wrench and it comes back to her like a boomerang

Croissant boards her timecraft and fires the mending laser at the enemies, dealing X damage, blinding them for 9 seconds, and removing 5 active buffs from them.

The damage dealt is increased by 10% per active buff on the enemies and Croissant Cookie herself.

Cosmos Gear, Croissant Cookie’s pet, rolls forward to link up with other gears, dealing X damage to enemies it passes through and stuns them for 7 seconds. When linked up, the gears will rotate and create Cogwheel jellies to sprocket out and damage enemies and boost allies, dealing X damage to enemies per cogwheel and grants allies Z armor per cogwheel. 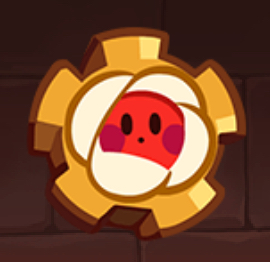 At the start of combat, Croissant Cookie grants time energy to the ally with the highest skill power , making them invincible for 4 seconds and granting them “Overclock” for 10 seconds.

Allies with “Overclock” will gain 150% attack speed, 50% more skill power, and active buffs cannot be removed or expire while “Overclock” is active.

The invincibility has a chance to fail on allies above level Z.

Croissant Cookie and her allies are immune to Fantastic Damage for the first 7 seconds of each wave.

Afterwards, when receiving fantastic damage, Croissant Cookie and her allies will negate 40% of it and gain a shield that has X HP as being healed for the damage negated.

The secondary effect can happen once every 6 seconds. Fantastic damage immunity has a chance to fail on allies above level Z.

The ally with “Overclock” will also be “Energized” while the effect is active. Allies with “Energized” gain 80 energy when they basic attack.

Allies that don’t have “Overclock” will gain 50% of the Overclocked ally’s basic damage, skill power, armor, and reality while the effect is active.

The boosts are reduced on allies above level Z.

Croissant-Kim Possible
A Sitch In Time
Reflect Debuffs
+Z Max HP
+Z Skill Power to Croissant Cookie and Support role allies
• Croissant Cookie and her allies without “Overclock” have a 12%/24%/36%/48%/60%/ chance to reflect debuffs to enemies that attempt to debuff them. The “Overclocked” ally will have a 18%/32%/54%/72%/90% chance to reflect debuffs.

Croissant-Hiro Hamada
Innovative Metal
”Overclock” Deals Bonus Damage
+Z Damage to “Cosmos Gear”
+Allies heal 1% (+1 per star level) of the “Overclocked” ally’s Max HP per second while the ally has “Overclock”
• The “Overclocked” ally’s Damage dealing white skill will deal bonus damage equal to 6% (+6 per star level) of the enemy’s Max HP.
• Allies can deal up to Z damage with this disk.

Although nothing changed lol