Scare because we care (likely concept) 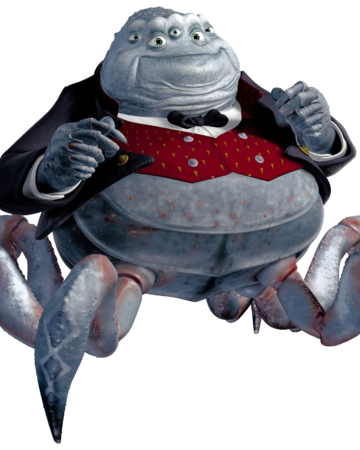 “There is nothing more toxic or deadly then a human child, a single touch could kill you!”

Victory: Mr. Waternoose sips a cup of coffee and chuckles

Defeat: Mr. Waternoose covers his face with his arms as he gains a shocked look on his face

Passive: instead of a normal basic attack, Mr. waternoose instead sips a cup of coffee, healing himself for X amount, giving himself X% energy and increasing his attack speed by 40% for 5 seconds

Green: We need this

Mr. Waternoose pulls out a scream canister and opens it slightly, the scream that comes out of it scares all enemies for 5 seconds and prevents each foe from gaining any energy for those same 10 seconds.

Mr. Waternoose dodges a close-range attack and slaps the enemy who tried to attack him. dealing X damage to the foe, knocking them back and silencing the enemy for 5 seconds.

Each time that an enemy tries to gain energy in battle, waternoose steals 25% of that energy from the foe and gives it to himself and the frontmost ally.

The ally with “top scarer” now instantly activates their white skill no matter how much energy they have when mr. waternoose activates
“Banishment.” While also gaining “energize” when their white skill ends.
+X skill power
+X armor
+X Max HP

Allies now gains energize when they are below 35% of their health.

Mr. Waternoose/Lock, Shock and Barrel
Scare because we can
longer scares and silences

All scares and silences to enemies now lasts 4 more seconds.