Apologies if this is later than expected. Here’s the last entry for the Cookie Run Ocean series on my Half. 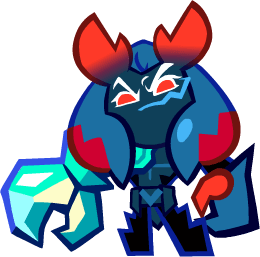 “One punch from my claw is all that I need!”

As long as the Crystal-Clawed guardian draws breath, no enemy would dare to endanger Lobster Cookie’s team. He preforms various techniques to strike down enemies.

Green Skill: Claw Charge (Normal Damage)
Lobster dodges an attack that deals more than 15% of his Max HP in a single hit and counters by charging forward with his claw, dealing Y damage and knocking them back. Lobster can counter once every 10 seconds.

Blue Skill: Relay Revival
Once per wave, when Lobster Cookie is KO’d, he revives, heals X HP and gains 300 energy and Y armor.

Lobster gains 2% more armor every 1% HP he is missing.

Red Skill: Guardian’s Honor
Lobster Cookie’s allies gain 100% of his armor as basic damage and 100% of his reality as skill power.

Every 3 times Lobster crits, his reality increases by 15%, up to a max of 150% more reality. This buff is carried from wave to wave.

The basic damage and skill power buffs are reduced on allies above level Z.