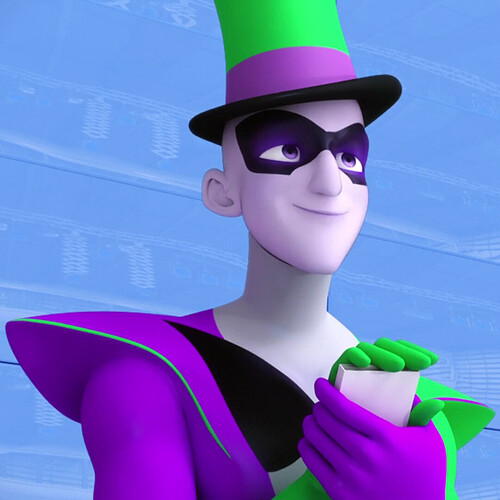 “Simon says…your lame, as lame as a duck!”

eccentric and controlling, Simon says makes use of his newly re-powered cards to hypnotise the battlefield

Victory: Simon says laughs while cycling through his cards

Defeat: The card that caused him to be akumatised rips apart (or if he is defeated by damage overtime the card instead gets set of fire and burns to a crisp) causing the Akuma to fly away as Simon says turns back into his non-villain form.

Passive: For each basic attack, the card will have a black and white silhouette on the front of the card which will give a different effect per the silhouette that is on the card when simon says throws it.

The effects are as follows…

Duck: inflicts the enemy with “distract” for 5 seconds.

Gorilla: charms the enemy for 7 seconds and increases their attack power and armor by X amount.

Active: Simon says waves his arm which then sends a bunch of cards flying at the enemy team, dealing X damage to each enemy and inflicting all enemies with “Mindless” for 10 seconds

Enemies inflicted with “Mindless” are unable to attack Simon says or his allies and have their movement speed reduced by 83% until the “mindless” wears off.

Simon says throws a card at the enemy with the highest skill power, dealing X damage to the enemy and decreasing their attack power and armor by 50%

If the enemy is inflicted with “Mindless”, the attack power and armor that was decreased is now granted to simon says for the rest of the wave.

Simon says throws a card at the enemy with the most movement speed which causes them to pause, stunning the enemy for 10 seconds, removing 20% skill power from the enemy and inflicting “mindless” on the enemy once the stun wears off.

Purple: Shows not over

Whenever an enemy is disabled while they are mindless, simon says steals 2 buffs from the enemy and gives it to two random allies with their duration refreshed.

Each second of the stun from “Pause” now decreases their normal crit by 15% per each second.

“Make or break” now cleanses all debuffs off of Simon says whenever he deals more than X damage with this skill.
+X skill power
+X damage to “Make or break”
+X max HP

…Miraculous has some weird names for their villains

Simon says throws a card at the enemy with the most movement speed which causes them to pause, stunning the enemy for 10 seconds

Doesn’t Lady WiFi do this?