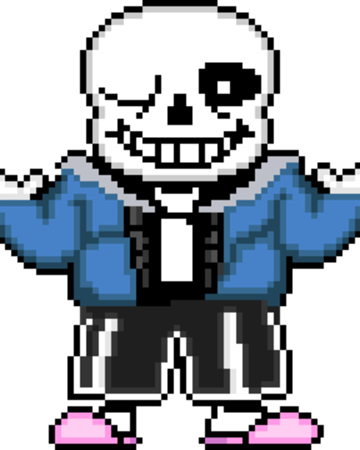 “Turn around and shake my hand”

Victory:he puts both his hands up and winks

Defeat:he puts his hand over his chest and then he turns to dust

neutral:brings out a bottle of ketchup and squirts it at the nearest enemy which damages that enemy and blinds for 3 seconds

genocide:sans stabs the nearest enemy with a bone which damages that enemy for x amount

passive:sans has 2 forms, “neutral” and “genocide” that change depending on how many of his allies gets defeated,in his"genocide" state, sans attacks and skills will be faster and more powerful.

Active:sans launches 4 bones at the enemies but the effects depend on what form sans is in

neutral:launches 4 bones at his enemies which travel slowly and deals x damage to enemies but has no other effects

genocide:does the same thing but the bones travel faster and now has a 60% chance to deal damage overtime to enemies for 5 seconds.

neutral: sans dodges a attack every 5.0 seconds and gains a small speed boost for 8 seconds

neutral:if a attack misses a ally or the enemies attack gets dodged, sans will pull out his trombone and play it which increases allies dodge chance by 20%

genocide:sans grabs the most wanted enemy soul and slams that enemy down which deals x damage to that enemy and stuns for 4 seconds

both of sans basic attacks now slows down enemies by 80% for 7 seconds.

sans slowly regains health when under 40% of his max health

“Barrage of bones” now has 2 more bones in the attack and deals fantastic damage when any ally gains a buff.

sans is now immune to all debuffs when in his “genocide” form.

Not bad. I will say the purple could be pretty op (compared to dorey and hank’s white which does something similar but in a more balanced way). Also I think that the neutral blue skill could be a passive skill since sans would rarely have time to attack against say a blind team. Overall pretty good though, good job.

I haven’t seen you in a long time

Yeah. I took a break from the game. I came back though since I have a lot of time on my hands.