Some advice to PerBlue

I will start off with saying this game well made. Looks great, good controls. But you have not been using how good it can be. The potential is being wasted. Even if you are just trying to get money that is out of the picture. The game started off easy enough. Level cap in the 70’s, only some characters. The game was good, I paid some money because I felt like I could play and get what I paid for. Then I did, but now what happened? Yes the level cap went up and that is not the worst thing but perblue decided to make it harder for F2P’s which yes, every game has whales. But this is non helpful to you company. If you want people to spend money the give back good deals. Your money would go up, and it would make us happy and more consist on buying. These are some ways you can help your game grow more;

If you were able to give as much to us, would you?

Gold isn’t coming enough. It’s too expense to craft and skill up. It’s almost 2M gold just to get a high toon skilled up each level up. To get my top 15 skilled up, it’s between 25-30M to get them up. The new Surge isn’t yielding as much gold either. On top of it all, the drop rates on bits is ridiculous. I do 100 raids and may get to 25 on a 50 badge. Considering how many badges are needed in Red, it can take a week or so just to get 1 complete red badge. When I have 100+ toons to work on, it’s just not possible. I can’t even keep up my top 15 while also trying to work on some of the new toons so I can keep up with the battles in war, coli and arena against the whales. We are fighting a losing battle against PerBlue in order to stay competitive in the game. I didn’t buy another year of diamonds because I don’t believe I’ll still be playing that long if the game keeps going like this. @Polaris please pass this on.

They always claim that they play this game as F2P… like most of us. Which I clearly doubt!!!

They said they care about us, and they want to fix the economy. Nothing has even changed! The cost still goes up because “that’s how things work” but strangely, the income is basically the same! How could we ever keep up if things are like this???

If you want to fix, the easiest solution is reducing the cost! Simple as that! I just wonder why they can’t (or refuse to) see it?

You don’t need every single heroes worked on/maxed… Take a look at latest friendship campaigns. Enemies are at highest rank available, higher blue and purple skills and maxed Red Skill… Yeah, that’s totally doable… for whales! Not for F2P and low spenders like most of us

Part of their contracts as developers Ive been told by someone else who’ve seen a pb contract , is getting paid 10k gems a day. So of course they not ftp players and a big reason why I believe s1 shouldn’t be merged with another server, if anything developers should be their own server. If maybe this wasn’t part of their contracts and they play like the rest of us, they see the issues we keep bringing up. Yes job of a company is to make money, but making the player base seem worthless and burnt out doesn’t help the product either. There needs to be a balance, a ying with the yang, etc.

s1 shouldn’t be merged with another server

Amen to that, 100% agree. This coming from someone who plays on server 1

The game is not even whale friendly

They are just making it impossible for f2p and whales alike

The ammount of players on s1 compaired to the newer servers is ridiculous and as one of the top players in s1 merging would alow the competetivness come back into the game …cause right now there is none.
There are 2 major guild and thats it, there is no player movement between guild unless they get upset with each other or they retire. And a lot of the older players are retiring because of the lack of competition and drive …plus the level cap raises are coming in EXTREAMLY too fast

All said in this topic : ABSOLUTELY RIGHT!!!
PerBlue is worst in balancing heroes and resources

I think that overall the game is pretty good, the game mechanics, combat and UI are all really well made, but the UX(User Experience) could have been better as the rewards aren’t increased enough as costs in the game raises. I think that’s the main problem.

I think the ideal minimum(VIP 0) base for a basic satisfying experience would be to be able to keep up with about 15 characters at once, or at least closer to 15 as we need 15 characters for Coliseum and Guild Wars and such. As a VIP 0 myself at level 185 I can say that I have a hard time keeping up with even 10 characters at once and more so only being able to keep up with 5-7/8 at once technically.
I don’t have the resources to level up Red skills as the overall costs are too high, though I do try to get the base Red skills for the characters I use.

So yeah, while the game is fundamentally good at the base, the low rewards and high costs lower the over quality of the UX, which means a lower Player Satisfaction which means that they are less likely to spend.

While a too fast Power Creep curve is an issue as well like others have pointed out, I would say it is easier to deal with if you can focus on more characters as you have an easier time having good counter characters leveled.

If it’s so terribly bad, can’t be resolved complain to Google and see if they can help resolve this. I have never gotten satisfactory help from a PerBlue ticket, if anything.

I have been playing this game almost since the launch and yes I am considered a whale. I can’t help noticing how quickly this game is going to die off, if there are not some changes made. The f2p people cannot keep up with the cap increases and the whales no longer want to spend the amount of money it takes to do so. If the whales loss interest the game dies, tis simple economics.

There are several simple ways you could fix this game and still keep your whales and the free-to-play happy. I’ll list some ideas here.

Cap and Badge level increases: Slow down with the cap level increases and the new ranks for badges. Give the players a break and let them catch up. Right now there are a lot of people that have been playing this game a long time that are ready to quit because how expensive it is to level up. Never mind the F2P that aren’t even trying anymore and if they feel they are not competitive they will quit playing. I know that cap levels and badge rankings are a part of the game but maybe spread them out more, like 6 to 8 weeks instead of every 4 weeks. Then make them cheaper. When it cost so much stamina and gold to level up a badge or a hero people choose not to do so.

Guild aid: you could make it where using guild aid we could help with not only stamina or gold but we could aid in hero chips etc. I have one hero that has over 50,000 extra chips that I will never use for anything. I could help my guild with that. Also in guild aid if somebody has the ability and the wish to complete an entire request for something they should be able to do so rather than it taking three people. the whales would like to help out our guild more but our hands are tied.

Fix the areas that have bugs: heist, City watch, arena, coliseum. None of these are really competitive anymore and therefore people don’t like to do them.

Last but certainly not least fix the rewards for the contests. Make it worth the players while.

These are all simple things that you could do that would improve gameplay across the board by letting the whales help more with their guildmates, letting the free-to-play advance more, and making the game overall more fun. 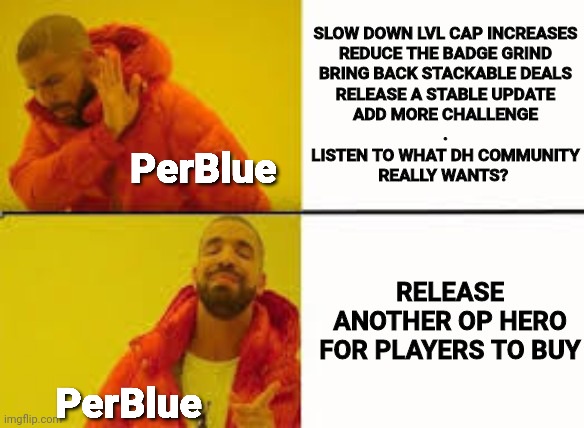 You say more challenge then they just make cw/surge levels over 9000​:joy:

I play in a top 10 guild on S22, we arent the best but we put in our work and love our guildies. But with this patch release, many of our officers including myself are ready to give up. This is mentioned almost non stop on the forums, but THE LEVEL INCREASES HAPPEN FAR TOO OFTEN!!!

In every other game I’ve played, Patch Day is the most fun day that everyone looks forward to, and its when a lot of non-whales tend to spend money. In this game, Patch Day is absolutely dreaded and makes a new wave of players quit each time. Cmon Per Blue! Why do you make update SO unenjoyable?

Your story on the younger servers is our story from a year ago when older servers where in youe place.
I don’t know how many posts I made over the past 2 years that stamina costs, skill costs, crafting costs are too high and the game economy isn’t working.
Even people who spend several hundred dollars or even thousands per months don’t have all needed resources.
There was never an evaluation of the raised skill and xp costs in 2018. It just went on and younger servers get now what the consequences are.
Don’t let me start on overpowered new heroes. This power creep is going on for over a year now. Every batch of new heroes land automatically a spot on the newest tier list being A+ overpowered.
Well, it seems to be the business model. It’s not about strategy and it hasn’t been for a long time. It’s about how deep your pockets truly are. If I see the deals that being pushes during a gold spending contest for example I just cringe. This is the first game I played where you can’t earn enough in-game resources to skill toons and craft their badges. Either you spend real money for an InGame currency or you getting nowhere real fast.
Older servers are dying even after merges and the newer servers are now in the reality of this game.
My conclusion was to cut my losses a long time ago and I stopped spending altogether.
If, and just if, the changes in the past were reversed I’d reconsider.

Gold income isn’t the problem… its spending the gold thats the problem.

Really the problem is that there’s not enough gold for what people need to use it on.

Either increasing gold income or reducing costs would help that issue.

How so? Could you please explain?

I meant reducing the costs by what i said.

Yes, 250k for one purple skill level is what kills me. With the new endless Surge (s21) and other changes, I was seeing some improvements until I started needing to spend 10mil to unlock a red skill.