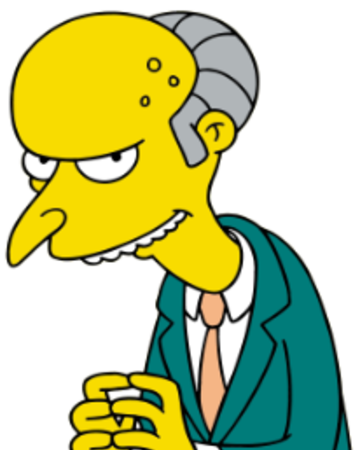 Entrance: Mr. Burns enters the battlefield in his limo then he and Smithers gets out of the limo which then dissapears

Victory: Mr. Burns laughs evily while Smithers gets a claps for his boss

Defeat: Mr. Burns gets angry while Smithers gets a annoyed look on his face

White: Block out the sun

Mr. Burns does an evil laugh, this scares all enemies nearest to mr. burns and decreases their movement speed by 45% for 10 seconds.

When under 35% of his health, mr. burns tells smither to release the hounds and the hounds run through the battlefield, dealing X damage to each enemy they pass through and scaring each enemy for 5 seconds.

Purple: Who the devil?

Mr. Burns attack power is increased by 5% for every X% of energy he gains in battle.

Red: A star is burns

While enemies are scared, mr. burns now steals X% energy from each enemy he attacks.

Allies now gain energize when they are below 35% of their max HP.