Sonic The Hedgehog (Unlikely Hero Concept. They could only really do it with Sega's permission. But if I saw him in the game, I know who I'm maining) 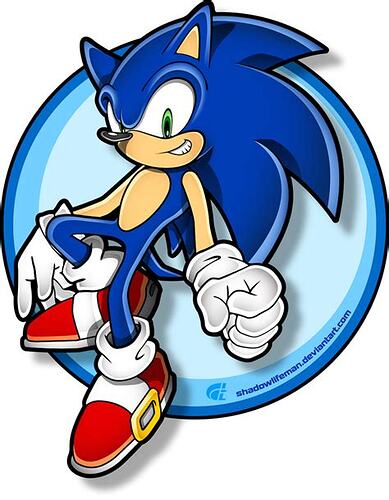 Description: The speedy blue blur makes his way into the game and gets ready to speed through the competition, as well as any creeps in his way.

Sonic Event (The Sonic event is where you go through zones that Sonic has been through before using Sonic energy, gained in the same way as normal energy, like Starlight Zone, Chemical Plant Zone, Sky Sanctuary, Stardust Speedway, and finally, the Death Egg. You battle 3 waves of heroes each zone. Once beating all three waves, you get 5 Sonic chips. Each zone resets after 24 hours. It works similarly to city watch where after a person is KO’d, they stay KO’d. I know that this character will never happen, but I might as well make this as creative as possible.)

Entrance Animation: Sonic speeds in, abruptly stopping in front of everyone else, then doing the Sonic Adventure cover art pose. He then lands and goes into his idle pose.

Basic Attack: Sonic runs up to someone at lightning speed, punching them. Then he speeds back after 3 punches.

Winning Pose: He does his iconic spin around then wagging his finger animation from Sonic 3.

Losing Pose: Sonic jumps off screen, similar to his 3 minute time limit death in Sonic CD. Then it shows the game over words where Sonic used to be. After 3 seconds, it disappears. Here’s what it looks like:

True Damage
White Skill: “Super Sonic Style!” Sonic goes super, zooming through the opponents several times, doing X damage, before stopping in the middle of the opponents team and releasing the Chaos Emeralds, doing X amount of damage and X amount of knockback, along with 3 seconds of stun. When going Super, he blinds the enemies for 5 seconds. The attack works similarly to Violet’s blue skill.
Super Sonic Design: 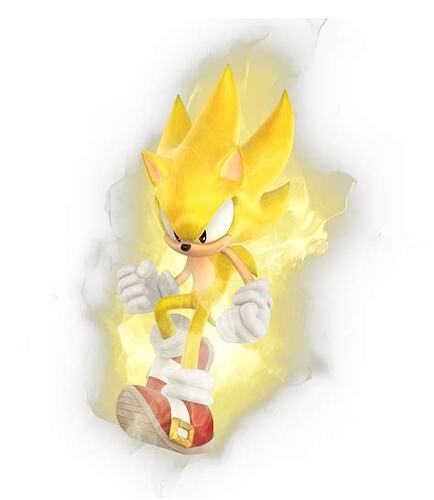 Normal Damage
Green Skill: “Lightspeed Dash.” A line of rings appear in front of Sonic. He then lightspeed dashes through them, dealing X damage to opponents.

Fantastic Damage
Blue Skill: “Spin Dash.” Sonic revs up a spin dash for 3 seconds. He then goes right through the opponents teams, dealing X damage and adds a slight bleeding effect to them.

Purple Skill: “Yeah!” At times, an extra life monitor will spawn that can only be damaged by Sonic and allies. Once destroyed, Sonic chooses a single ally that’ll come back to life with half HP and a full energy bar. If Sonic chooses himself, he’ll jump back on screen and continue fighting. It only has a 10% chance of appearing (buffed up to 25% for O0) and can be used by clicking on one of your KO’d allies down at the bottom, similarly to Phil’s purple skill. It also only ever appears if Sonic is alive, so your best bet is to take Sonic out first. If you want to save it, you can, as there will be an option to save it, but when all heroes are KO’d, you have to choose a hero to revive.

Friends:
Friendship 1:
Sonic & Dash.
Campaign: Gotta Go Fast! Sonic’s seen Dash and how fast he can go. So he challenges him to a race. Unfortunately, there are some creeps in the way. Not a problem for Sonic though!
Level: 70.
Disk: Bold Speedsters.
Disk Memory: When charging “Spin Dash”, Sonic can damage enemies that get too close. He is also invincible when charging.
Disk Power: Z evasion, Z HP gain.
Allies: Vanellope, Duke Caboom, Quorra.

Friendship 2:
Sonic & Mickey Mouse.
Campaign: Big Icons. Sonic and Mickey Mouse finally meet. Sonic has heard a lot of good things about the mouse, so he’s kind of excited to meet him. But before they get to talk, some unexpected creeps and robots appear in front of them. They get ready for a fight.
Level: 67.
Disk: Film Award.
Disk Memory: When using “Lightspeed Dash”, each ring will heal Sonic X HP. He’s resistant to non physical attacks as well.
Disk Power: Z Damage.
Allies: Woody, Chip and Dale, Scrooge McDuck.

Skin: This might work. Only thing is that Sonic’s blue skill, “Spin Dash”, has a slight lightning effect to it when this skin is equipped. 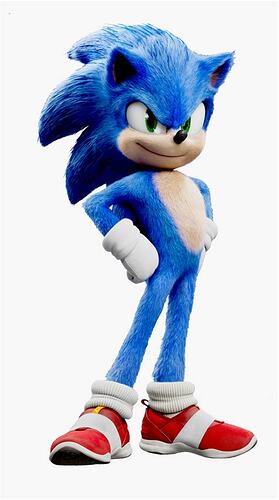 Yes, other’s may work. But Boom is one I dislike, Classic has been overused, and Metal and Shadow are good to be their own characters (though Metal might work as an assist for Eggman as well). And .EXE is kinda overrated and the creator did some bad stuff last I heard. So Movie Sonic (not Ugly Sonic) is the best choice. Anyways, Papyrus is next.

If someone could tell me how I can link a suggestion to mine, I would be grateful.

Didn’t even know you could do that. Lol

Oh. Well I’ve seen people link their old concept ideas to new ones, so I was just wondering how I could do that.

Could happen considering he appeared in both wreck it ralph movies

Eh… just because he appears in those movies doesn’t automatically mean he has a chance. Disney and PB would probably still have to get rights to use him from Sega, and I don’t think that’s happening.

Yeah, to be honest, unless Sega decides they’re feeling a little more generous and does a little event with Disney and PB, Sonic most likely won’t get in the game. It’s a possibility, but a slim one.