This concept is requested by @C-train. However I was already planning on making this so what a coincidence! 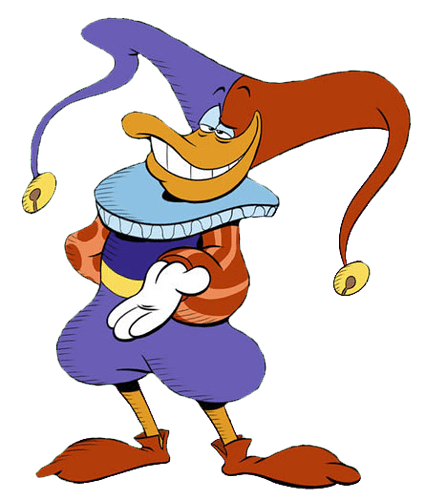 “He has merchandising tie-ins. He has an advertising budget. He has better looks. But QuackerJack has TOYS!”

With an arsenal of deadly toys, QuackJack uses his mean tricks to give a whole new definition of “Playtime” to the enemies.

Active: QuackerJack sets up an inflatable punching bag in front of him for 10 seconds. It has X HP. The more it gets damaged, the more inflated it will be. Once it reaches 0 HP it explodes, dealing X damage to all enemies, silencing them for 10 seconds, and QuackerJack gains 100% attack speed for 12 seconds. There can only be one inflatable punching bag on screen at a time.

Green Skill: Banana Bomb (Normal Damage)
QuackerJack throws Mr Banana Brain at the middle most enemy, dealing Y damage. It then explodes, dealing X damage to all enemies and blinding them for 7 seconds.

Purple Skill: Pure Wackiness
QuackerJack deals 100% more damage to disabled enemies and will prefer to target them with his basic attacks. Each time an enemy is disabled, QuackerJack gains 40 energy.

The bonus damage and the energy gained is reduced when the enemy is above level Z.

Red Skill: Toys Czar Us
QuackerJack heals Z HP per disabled enemy on screen. When an enemy is disabled again while already disabled, they take Z damage over 12 seconds.

QuackerJack-Lock, Shock, & Barrel
Unwanted Toys
Hardy Buff Countermeasures
+Z Max HP to QuackerJack and Damage role allies
+Z Damage to “Spring Loaded”
• When an enemy has more than 4 stacks of “Hardy”, QuackerJack will target them with “Banana Bomb” and will remove up to 4 Hardy stacks from them.
• Enemies that had stacks of “Hardy” removed from them will be stunned for 3 (+2 per star level) seconds. This stun is unaffected by tenacity, evasion, and Hardy.

You know the rules

Oh my god, the brilliance of this line. But also, R.I.P. Toys R Us. Never forget. Great concept!

You got proof? No seriously.

I looked. The animations and quote are similar or the same BUT they did not ‘copy’ anything of importance, like the skillset.

And regarding QJ’s white skill, what happens when he is at max energy while a punching bag is active?

Sorry Aamir! Only one request per customer! However I am planning on making Bushroot and Liquidator in the future.

And regarding QJ’s white skill, what happens when he is at max energy while a punching bag is active?

Then he doesn’t use it, simple. Once the punching bag is gone, he uses it again.