OOPSIES! For anyone who saw, I accidentally added an unfinished version of Violet’s overview. After I actually finished my writing for Violet, the forums will NOT allow me to add it because that makes my post exceed the maximum amount of characters!

And so I must end the Guide with Rafiki and rename this as “Support Hero Guide (PART 1)”. Sorry folks, but I guess this is what I get for being overly thorough

Oh this is very helpful! Many of my supports are weak so this let me know which I should work on. Thanks!

So excited to start writing about Timon and Pumba! They might actually be the first to become a definitive counter to the Merlin meta! Of Course, that all depends on the strength of Hakuna Matata and whether or not it can overcome the Aladdin + Barbossa combination. 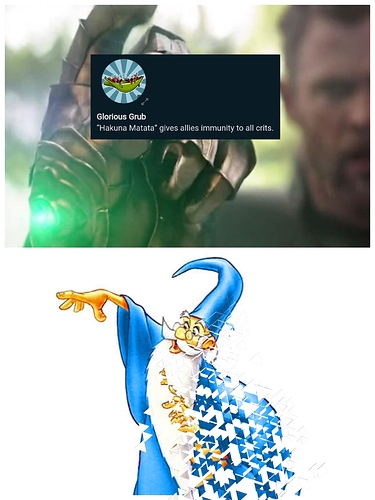 I’m thinking about adding a Mod segment for the guide. Mods have become more powerful, so they’re starting to make a difference. What do you guys think?

What about Damage,Control,and Tank guide?

Seriously? You want to give @Aurora_Veil more work? There are currently 67 heroes in the roster. Aurora put a lot of work on this, only for someone to feel like it’s too little?

Oh, it’s no biggie. I thought it was flattering, but I’ll leave the other Hero Roles to someone else, should they decide to do something like this.

It seems that Judy will be receiving a small buff to go with Sulley & Boo’s refresh. I like what I read, but I don’t think it fundamentally changes anything that Judy does. So I don’t think her overview needs an update for the time being.

I found this guide extraordinarily helpful, so I thank you for writing and organizing it so well.

I have to agree it would be great if somebody made a guide for the other types of heroes as well.

This is a silly question, I know, but what does CC mean? I don’t know gaming terms well, I guess.

CC means Crowd Control, referring to certain skills that slow down or interrupt enemies, examples being stuns, freezes, and slows

Small update: I made a small edit on Rafiki’s Overview. Since the new Red promotion rank, Rafiki has finally gained badges that granted him a new stat: Evasion. I changed a few things accordingly.

Something I’d like to clarify about Rafiki’s “The Past Hurts”. The game tells you that Rafiki will buff the ally with the highest Basic Attack–what the game DOESN’T tell you is that Rafiki will choose based on natural stats. This means, you can’t affect Rafiki’s choice no matter what you try to do to the stats of his allies.

I have Scar and Gaston in my team. Both heroes are at max level, max rank, and max stars. My Scar has a maxed out friendship disk that gives him more basic damage and I even gave him more basic damage with the addition of Mods. My Gaston has no friendship disk nor does he have any mods equipped. After adding the numbers, Scar will have the higher numbers because he has damage modifers equipped with him. With both characters on the field and Rafiki together with them, Rafiki will choose to buff Gaston anyway because Gaston still has the higher natural basic attack stat when compared to Scar.

Keep this in mind when forming teams with Rafiki. If you have Bo Peep for example, Rafiki will not try to buff anyone else until Bo is KO’d.

Is this the same way Merlin chooses to squirrel enemies? Only based on natural ‘white’ stats?

Thank you. I’m too lazy to look before every battle, but at least this makes more sense now.

It’s interesting to see how rafiki buffs Judy in surge and just watch her kick everything down.