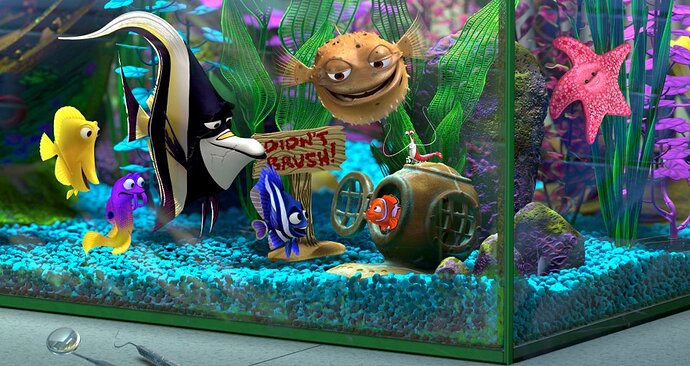 “Nemo! Newcomer of orange and white! You have been called forth to the summit of Mt wannahockaloogie to join with us in the sacred bond…of tankhood!”

Entrance: the gangs fish tank appears then the tank gang swims to the front of the tank (the tank stays still in their position)

Victory: the tank gang cheers from inside the tank

Defeat: the tank gang gets tired and floats down to the ground defeated

Basic attack: a pebble is launched out of the ring of fire at the nearest enemy, dealing X damage

Passive: At the start of each wave, the tank gang grants the ally with the highest skill power “sharkbait” for the rest of the wave.

Active: Bloat tilts the fake volcano in the tank, jacque activates the ring of fire and this launches gill out of the tank as he then bounces onto the head of each enemy, dealing X damage to each enemy, stunning each enemy for 5 seconds and decreasing the duration of 2 positive effects on each enemy by 3 seconds.

The attacks are as follows.

Peach: Peach tells the gang about her findings, granting precise to the tank gang and the ally with “sharkbait” for 7 seconds.

Bloat: becomes annoyed and then inflates inside the tank, increasing the attack and skill power of all allies by X amount.

Gurgle: becomes scared of the enemy team and cowards, granting themselves and the ally with sharkbait a shield for X amount and granting the tank gang reflect for 7 seconds when their shield wears off.

Deb: She talks to her “sister” flo which concerns their allies so much that they have their movement speed increased by 70% for 10 seconds.

Bubbles: he plays with the bubbles from a fake chest in the tank before closing the chest, cleansing 2 negative effects from each ally with 2 extra negative effects cleansed off of “sharkbait” allies and healing all allies for X amount.

Jacque jumps out of the tank and cleans the ally that has taken the most damage when this move is activated, healing the target ally for X amount, increasing the duration of all positive effects on that ally by 4 seconds and giving that ally reflect for 4 seconds.

If the target ally is the ally with “sharkbait”, that ally is granted X armor and X extra HP for how many buffs are on that ally.

For each buff on the tank gang, the healing they grant is increased by 14%

Story: Nemo has a unexpected reunion with the tank gang when he finds them being unable to move their tank around…so he and his father decides to carry them with them for a night out on the docks using gerald to pull the tank.

Story: the tank gang decides to hatch a plan to get out of the tank and into the ocean…to accomplish this, the gang decides to push their tank onto moana’s boat without her noticing in order to tip the tank to dump them into the ocean but thanks to gurgle’s insecurity, it leads to them getting stranded in the tank on the boat out at sea.