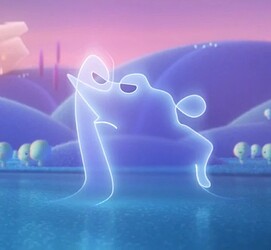 Terry enters the City to search for souls throwing off her count, but as the street fights rage on, the heroes could use a tallier like her to help enhance them.
Trial Team: Red
Role: Midline Control
Stars:

Quote: “You’re out there somewhere, little soul. And I’m gonna find you.”

Animations:
Entrance: A sidewalk materializes in the battlefield, and Terry travels along the grooves of the sidewalk.
Victory: Terry holds out her trophy, smiling as she takes in the applause.
KO: Terry frustratedly retreats along the sidewalk grooves.

Green Skill - Abacus Boost
Terry slides all the beads on her abacus to the side, applying one of the following buffs to allies. Each time she performs this skill, the buff alternates.

Blue Skill - the Count’s Off
Each time an ally reaches 0HP, whether they self-revive or not, Terry notices the count is off on her abacus, proceeding to grant X energy to all remaining allies.

Purple Skill - Cheaters Never Prosper
Each time Terry performs her “Soul Swipe” skill, she also steals X energy from the frontmost enemy. If the targeted enemy has their max HP restored to 50%, they will regain their energy as well as steal all of hers.

Her reality and Skill Power is increased to X.

Red Skill - the Universal Tallier
Terry removes X HP from enemies for every bead she slides on her abacus during her Basic Skill and “Abacus Boost” skill.

Terry + Goofy
Campaign: Vacation Plan - As much as she doesn’t want to admit it, Terry is in dire need of a vacation from searching for loose souls in the City. She meets Goofy, who serves as her guide to fun vacation activities. Sure, creeps are bound to intrude, but as Goofy promises, it’s all worth it.
Disk: Hang Infinity
Disk Memory: Terry is invincible for 5 seconds each time she performs her “Abacus Boost” skill.
Disk Power: Z energy gain
Allies: Agent P, Hank & Dory, Rapunzel