Here’s something I haven’t done in a while, a cookie run concept that I hope you all will enjoy! If not, then that’s fine…I just make these concepts for fun (also…this concept will take advantage of the newest disable to come to the game) 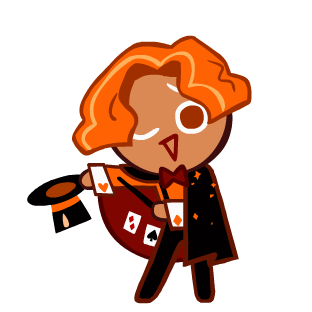 Entrance: A burst of cards comes from the ground which reveals cinnamon cookie as he taps his wand on his hat.

Victory: Cinnamon Cookie takes a bow as he puts his hat on his head

Defeat: Cinnamon Cookie falls onto his chin as he drops his hat

The card tricks that cinnamon cookie can perform are as follows.

Sky tricks: cards fall from the sky onto both teams. allies gains 27% energy and X crit power from each card that they gain, each enemy is dealt X damage overtime for 5 seconds and are also inflicted with shattered for 10 seconds

Fountain tricks: a fountain of cards shoots from the ground below the enemy team, dealing X damage to all enemies, decreasing their critical power by 45% and having a 40% chance to inflict “shattered” onto each enemy.

Green: From the hat

Cinnamon Cookie taps his hat twice and then tosses a bunch of cards from his hat at the enemy team, Dealing X damage overtime for 10 seconds, blinding each enemy for 7 seconds and increasing the duration of any “Shattered” on an enemy if they already have been inflicted with “Shattered”

At the start of every wave, cinnamon bunny enters the battlefield alongside cinnamon cookie. Cinnamon bunny attacks by throwing cinnamon bombs at the nearest enemy, dealing X damage to the enemy and inflicting the foe with “Shattered” for 7 seconds.

Any disable on an enemy now decreases the reality of each foe. If the disable is “Shattered”, the foes reality and evasion if decreased by 45%.
+X skill power
+X damage to “Hectic Tricks”
+X reality

Enemies inflicted with “Shattered” now have 25% HP stolen from them and given to cinnamon cookie.

The damage dealt by damage over time is now increased by X amount per second.

What a cute concept. Your Cookie Run concepts somehow make me happy.