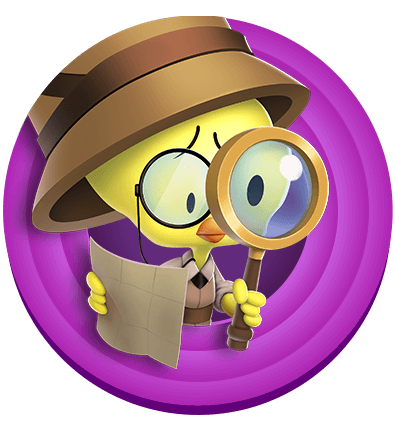 while some hunters prefers to hide in the bushes and shoot at prey, this nerdy hunter uses unreasonably elaborate traps to catch his prey by surprise

Entrance: Egghead peers out of a bush and then looks at the enemy team with his magnifying glass before then getting into position

Victory: Egghead looks at the defeated enemies and straightens his monocle.

Defeat: egghead activates a trap but it backfires and ends with egghead getting crushed by a falling tree

C. Egghead burns a rope which causes a a rock to fly at the enemy with the highest fantastic crit, dealing X damage to the enemy and knocking the enemy back. Then the rock breaks a tree from off-screen causing the tree to fall onto the same enemy, dealing an additional X damage and stunning the enemy for 5 seconds.

C. Egghead then becomes invisible for the rest of the wave.

C. Egghead sets up a timber trap, after a few seconds, the tree that is apart of the trap falls onto the enemy team from off-screen, dealing X damage to all foes and decreasing their fantastic crit by 40%.

If C. Egghead is hidden when he activates this move, this move will stun all foes for 4 seconds with an extra 1 seconds for each 15% fantastic crit decreased off of each enemy.

Every third basic attack, egghead pulls a rope which causes a rock to fall onto the enemy with the most buffs, dealing X damage to the enemy and stunning the enemy for 5 seconds.

If C. Egghead is invisible when he activates the move, this skill now flips 2 buffs on the enemy and the stun now lasts 3 seconds longer.

Whenever C. Egghead damages an enemy, C. Egghead gains 25% energy, heals himself for X amount and increases the attack power of all allies by X amount.

All stuns towards enemies now flips 1 buff on each enemy per each second that they are stunned.

While C. Egghead or his allies are invisible, their attack speed is increased by 80% and they are immune to disables that last for more than 6 seconds.
+X damage to “Covertly Complicated”
+X skill power
+X reality

Invisible allies now have the damage they take from enemies reduced by 25%.

All stuns now flips 2 more buffs on each target enemy.

Nice. I’m waiting for someone to make a big Chungus concept, because I unlocked him.