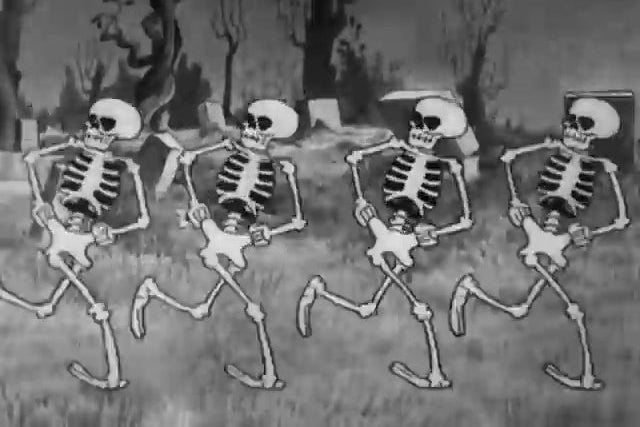 No living thing can compare to the likes of this crazy quartet. Even though they have no experience in fighting evil, they still have a bone to pick with it.
Trial Team: Red
Role: Midline Control
Stars:

Quote: n/a (the Dancing Skeletons do not speak)

Animations:
Entrance: The skeletons’ heads repeatedly clack from behind a gravestone, and they walk out into the battlefield before the gravestone disappears.

Victory: The skeletons dance in a circle.

KO: The skeletons hear a rooster crow, panic, and jump into a grave.

Skills:
Basic Attack: One of the skeletons throws their heads at enemies.

Green Skill - Scaredy Cat
A cat enters the battlefield and hisses at enemies, scaring them for 8 seconds.

Blue Skill - Hoo Goes There?
An owl swoops in to silence enemies with its screeching call for 5 seconds.

the Dancing Skeletons + the Evil Queen
Campaign: All-Powerful Peril - The Evil Queen spots the skeletons and asks them for their assistance in creating a new kind of poison apple. After they retrieve the ingredients, she turns on them and goes on her way, bringing the skeletons to pursue her and destroy the poison apple.
Disk: Poison Control
Disk Memory: The skeletons take 65% less damage from enemies for the rest of a wave after performing their “Hoo Goes There?” skill.
Disk Power: Z Blue Skill power
Allies: Yzma, Linguini & Remy, the Swedish Chef