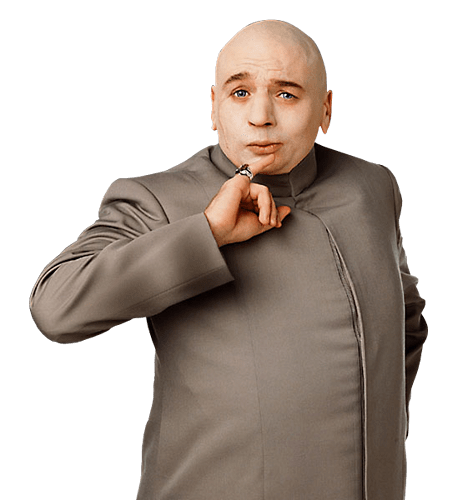 Dr. Evil lives up to his name with his assassins and brilliant schemes

Entrance: Dr. Evil rolls into the battlefield in his chair with wheels

Defeat: Dr. Evil freezes himself and launches away in a big boy rocket

Mustafa’s defeat: mustafa falls into a open fire pit as it then closes

Dr. Evil calls in his fez-wearing henchmen Mustafa to fight with him, Mustafa has X HP and deals X damage with his basic attack.

Dr. Evil presses a button which activates a trapdoor that leads to a firepit below the enemy with the highest HP, this instantly ko’s the enemy and scares any enemy near the fire pit for 5 seconds.

Blue: how about no!

When a enemy is about to deal a critical hit to one of his allies, he denies the ally from being damaged from the crit which deals X damage to the enemy dealing the crit and also silencing the enemy that deals the crit for 5 seconds.

Dr. Evil can only activate this skill every 4.5 seconds before it has to cooldown.

Dr. Evil is now immune to crits whenever he is under 40% of his max HP.

All silences and scares done to enemies now decreases their armor by 100% for the same seconds that they scared or silenced.

“How about no!” Steals X energy from the enemy that tried to deal critical damage and gives it to the ally who was targeted by the crits.
+X damage to “How about no!”
+X max HP
+X skill power

Dr. Evil/Megavolt
Mastermind’s Mojo
mustafa gets called back when ko’ed the first time

Energy should never be a variable, it needs to be specified

Other than that, was this concept bad?

Is he from Star Trek,he looks like he is but I could be wrong