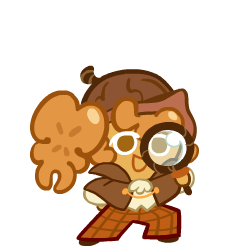 “Genius detective, at your service!”

When crime is afoot, call in the detective! Using her knowledge from detective novels, Walnut Cookie analyzes the enemy trails, leaving no clue unturned.

Active: The player chooses which enemy for Walnut to investigate. She then takes 1 active debuff from an ally and follows the enemy trails. Once she implicates the suspect, she deals X damage to the them, and studies them for 10 seconds. If the debuff originally came from the enemy studied, they are dealt X additional damage and have the debuff applied to them.

Normal damage always crits against studied enemies. While on auto, Walnut will chose the enemy with the most basic damage. The study has a chance to fail against enemies above level X.

Green Skill: Suspect Elimination
Walnut eliminates the weakest ally from her suspect list, healing them for X HP, cleansing all their debuffs, and granting them 2 stacks of Hardy.

Hardy blocks one debuff applied and is then removed.

Blue Skill: Detective Instinct
Once every 8 seconds, If Walnut were to take more than 25% of her Max HP in a single hit, she would instead dodge and counter the attacker by studying them for 6 seconds.

Walnut and her allies also gains 100 energy each time they study an enemy. The study has a chance to fail against enemies above level X.

If an enemy has a buff that is the opposite purpose of the ally’s debuff with “Suspect Analysis”, the ally gains that buff and the enemy is dealt X additional true damage for every second on the debuffs original duration.

Ah, so this is where Basil becomes useful lol. Anyways, great concept, as usual.

I cannot decide what my favorite Cookie Run concept is. They are all great!