An unexpected turn of events!

Breaking News! An unexpected turn of events: eye witnesses claim to have spotted the mysterious Phantom Bleu within the digital city. What might this elusive figure be up to? 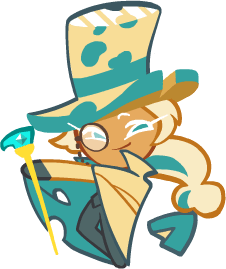 “Only I can see your true worth!”

The mysterious phantom thief Roguefort cookie controls the flow of the battlefield, stealing hearts and jewels in a blink of an eye.

White Skill: Into The Night (TRUE Damage)
Passive: Rougefort is immune to charms and will turn invisible during the charm’s duration.

Active: Roguefort becomes untargetable and infiltrates the enemy lines. They steal one active buff from enemies, if possible X armor, X reality, dealing X damage to each enemy, and granting it to themselves. Rougefort then becomes invisible for 6 seconds after this.

True damage ignores armor and reality. Stealing buffs, armor, and reality have a chance to fail against enemies above level Z.

Green Skill: Smoke Screen (Normal Damage)
Lord Crumbles III, Rougefort’s pet, jumps out of their hat and pounces at the closest enemy and creates a smoke screen, dealing Y damage and sapping the initial target for 6 seconds and blinding all other enemies for 9 seconds.

Blue Skill: Heart Stealer
Roguefort steals hearts from the 3 closest enemies, charming them to fight on their side for 8 seconds. While charmed, enemies gain 40% of Rougefort’s skill power. When the charm expires, the skill power redirects back to Roguefort for the rest of the wave.

The charm has a chance to fail against enemies above level Z.

This effect is reduced on allies above level Z.

Red Skill: True Value
Roguefort gains a 45% chance to dodge skills or debuffs from enemies level Z or below. If they successfully dodge an attack, they gain Z basic damage and 200% attack and movement speed for 7 seconds.

“Into The Night” also transfers all of Rougefort’s active debuffs onto enemies damaged.

Rougefort’s chance to dodge attacks is further reduced against enemies above level Z.

Rougefort-Flynn Rider
Royal Heist
Share Stolen Buffs with Allies
+Z Reality
• Allies gain 20% (+20 per star level) of the skill power, armor, and reality gained from “Heart Stealer” and “Into The Night”
• Roguefort also grants each ally a random buff that was stolen from “Into The Night”

It’s ok if you don’t know what they are from.
They’re from a game called “Cookie Run”
If you want to learn more, check it out!

I think others have said this to you on other topics but can you leave variables as a single letter? It just makes the concept look cleaner.

Ok then. I put multiple Xs because it shows how much “value” it is. Like how much armor is stolen or how much damage it deals. I’ll change it if necessary.

That is true, I’ll use one X next time.

I think sure and I don’t know what this is.

Most people may not recognize it, but I’m sure a few would.

Feedback is wanted for improvements on my concepts!

I mean, do you like it? Because if not, I’ll stop making them.

I like it but i don’t know what it is.

Glad you liked it!
I’m worried nobody will like it though.

very creative! just because someone does not know something or care about it does not mean you have to stop making concepts of that thing!

I LOVE IT!
I know I’ve already told you that the concept is amazing, but I’m also still really happy I’m not the only Cookie Run fan who plays DHBM.

Thanks for the feedback guys!

Apologies for the revive, but this concept got refreshed! Here’s what I changed: