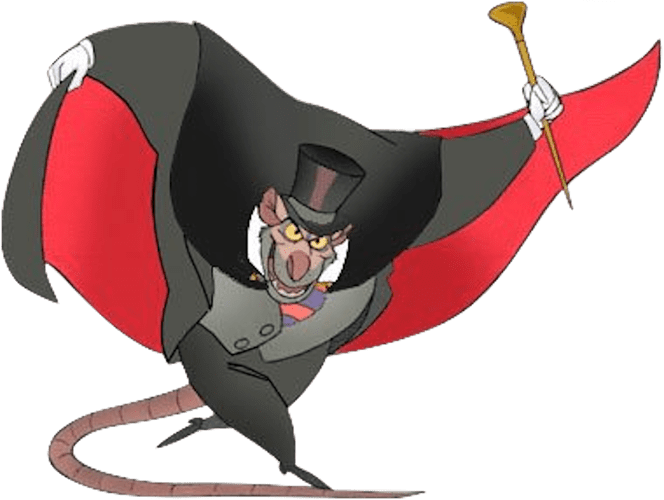 The greatest criminal mind of all, Ratigan makes sure enemies follow his command.

Entrance: Ratigan walks with pride into the battlefield. When he arrives at his position, he bows

K.O.: Ratigan places his hand over his eyes and leans backwards

Basic Attack: Ratigan takes out a piece of paper and writes on it with a quill pen 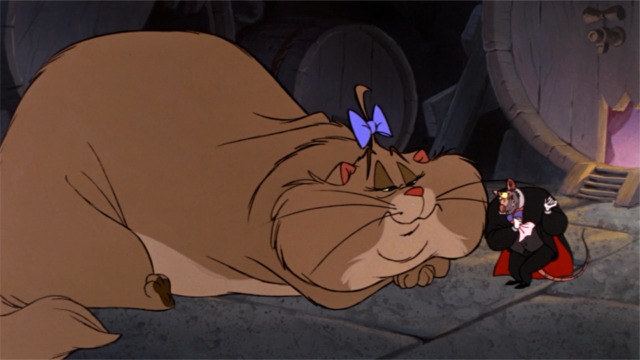 Green Skill: Proper Motivation
Every 8 seconds, Ratigan dodges an attack and presents his bell, decreasing the basic damage of all enemies by X and silencing them for 8 seconds. Ratigan gains 2 stacks of “Check” with this skill.

Blue Skill: Enraged
The first time Ratigan reaches 50% of his Max HP, he gains 80% attack speed for the rest of the wave. When this skill activates, every basic attack reduces nearby enemies’ attack and movement speed by 40% for 3 seconds and reduces the cooldown of “Proper Motivation” by 1.5 seconds.

Slow may fail against enemies above level Z.

Normal Crit and Armor Negation reduction may fail against enemies above level Z.

Normal Damage
Whenever an enemy attempts to remove a buff from Ratigan, Ratigan’s debuffs are removed instead.

When a slow from any source is removed or is timed out from an enemy, enemies are silenced for 5 seconds and are dealt Y damage.

Silence after slow may fail against enemies above level Z.

EDIT: This also my submission for @Disney-Fan’s Animal Kingdom Contest!

Is this your submission?

Oh yes. Forgot about that lol

To Ratigan, The World’s Greatest Rat! And yes, never call him a rat or he’ll get upset!

It was at this moment that I knew. I screwed up!

Ratigan gains 7 Armor Negation for every stack of “Check” he has.

Ratigan takes out a bell and rings it, consuming all stacks of “Check”

So wait. What’s the point of gaining negation if he has to remove the stacks in order to deal damage?

What’s the point of gaining negation if he has to remove the stacks in order to deal damage?

Well… my purpose was for the stacks to be consumed after the skill is used. Lemme edit that in.

That’s alright lol, please put a link for this concept on the Contest page