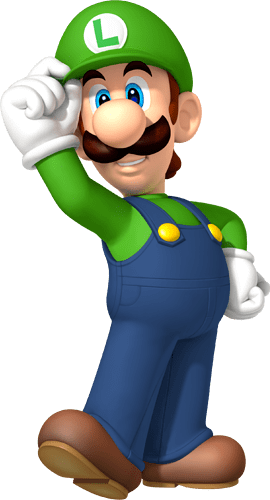 Entrance: a green warp pipe appears and then luigi jumps out the pipe with both hands on his cheeks then he lands into his position as the pipe dissapears

Defeat: luigi falls to the ground as his legs stick up for a second before flopping back down

Passive: at the start of each wave, luigi uses a power-up that is chosen by the player…luigi can choose from 3 power-ups, each with their own basic attack for luigi when chosen, luigi loses the power-up when he is under 60% of his max health.

Ice flower: transforms luigi into ice luigi which let’s luigi shoot iceballs that freezes enemies that get hit by the iceball for 4 seconds at a time.

Bee mushroom: transforms luigi into bee luigi which let’s luigi sting the closest enemy with the costumes stinger, dealing x damage to the enemy (only recommended when he is in the frontline)

Boomerang flower: transforms luigi into Boomerang luigi, while in the form, luigi attacks the target enemy with a boomerang, dealing x damage to the enemy and any other enemy that is in the boomerangs path and also dealing a additional x damage when the boomerang comes travels back to luigi.

Active: luigi pulls out his poltergust 5000 and turns it on, sucking in the enemy with the highest stats closer to his team, it also steals x energy from the target enemy.

Fantastic damage)
Luigi creates a ball of thunder in his hand and then he uses it to shoot a bolt of blue lightning at a target enemy, dealing x damage to that enemy and also slowing the target enemy by 70% for 6 seconds.

normal damage)
Every few seconds, a boo floats slowly past luigi and towards the enemy team, the boo deals x damage and also scares any enemy that is in its path of floating for 5 seconds

If the boo is in the battlefield and luigi activates “poltergust 5000”, the boo will get sucked into the vacuum which increases the amount of time that the target enemy will be scared for by 4 seconds.

Ice flower: each basic attack to the target enemy now decreases X% armor from the enemy for as long as they are frozen

Bee mushroom: deals x more damage towards enemies that has been slowed by any source

Boomerang flower: the basic attack from this form now deals knockback to each enemy from when the boomerang hits the enemy from the front and when it comes back around.

“Green thunder” now prefers to target disabled enemies which increases the amount of time the disable lasts by a few seconds and also slowing the disabled enemy for 20% more of the normal slowing.

While in one of his power-up forms, luigi now gains increased movement speed and attack power for the amount of time the power-up lasts
+X damage to “green thunder”
+X movement speed
+X skill power

The scaring from “Boo’s haunting” now are 50% more powerful against slow enemies.

All disables from luigi now decreases stats off of enemies for how long the enemy is disabled.