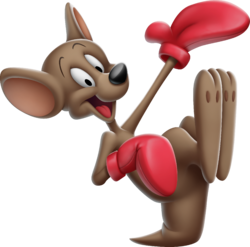 A powerful boxer with an array of knockout moves…is really a kangaroo with boxing gloves, be wary of his powerful haymaker

Victory: Hippety Hopper raises his hand up with a smile

Defeat: Hippety Hopper gets tired and stops to catch his breath

Passive: For each basic attack hippety hopper deals to an enemy, he is granted X attack power and 25% attack speed

Active: Hippety Hopper hits the nearest enemy with a strong haymaker, dealing X damage to the foe, knocking the foe back and dealing X extra damage per each amount of attack power increased on him.

Hippety Hopper delivers a body blow to the nearest enemy. dealing X damage to the foe and knocking the enemy back.

This skill is unavoidable and uncounterable.

Whenever Hippety Hopper crits against an enemy, he stuns that enemy for 4 seconds and halves the duration of buffs on that enemy.

All stuns against enemies now drains their attack power by 25% for 5 seconds.

“Body blow” now deals X more damage per each 15% amount of attack power that is increased on hippety hopper.

You probably wasnt expecting a reply this early, but what is the source of this character?

Must your defeat sign must be stops to catch his breath