“You’ve interfered for the last time! Now, pig keeper, you shall die!!” 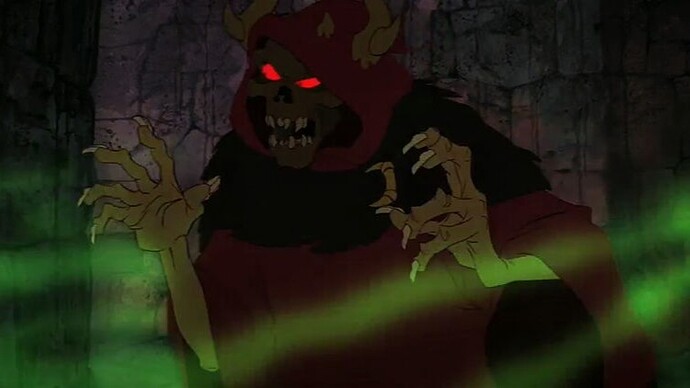 The Horned King is a powerful sorcerer who heavily relies on reinforcements to do his bidding! Using the Black Cauldron itself, he can summon his own minions, and unleash pure chaos!

Passive: Instead of fighting, The Horned King stays in the back, slowly gathering energy from the Black Cauldron.

At the start of each wave, The Horned King appears alongside his minion, Creeper.
Creeper has X HP, X basic damage, X armor and X reality. When “Arise!” is activated, Creeper will laugh manically, scaring all enemies for 7 seconds if he’s still alive. Scare has a chance to fail against enemies above level X. If Creeper isn’t on the field when “Arise!” activates, he will reappear with full HP. When The Horned King is defeated, Creeper will also be KOed.

When a Cauldron Born or Creeper is KOed, The Horned King gains Reflect for 6 seconds

The Cauldron Born summoned from “Arise!” comes out with Invincibility for 5 seconds.
Creeper takes 50% less damage when The Horned King summons him a second time with “Arise!”
The Horned King is immune to TRUE damage when a Caludron Born and Creeper are KOed.

Is charged in battle when: A Cauldron Born and Creeper are both in battle.

Campaign: Flames of Pure Evil
Description: When the two hellfire fueled sorcerers meet, they attempt to take over every corner of the city, but their progress is hindered by those pesky heroes!
Campaign Heroes: Madam Mim, Dr. Facilier, Hades

Cauldron Borns summoned from “Arise!” and Creeper are immune to disables from enemies below level X, and give The Horned King a stack of Hardy for every blocked disable, up to 3. (+1 per star.)

Campaign: Competitive Conjuring
Description: When The Horned King tries to command his army, one of them revolts, being under the control of Jafar. After finding out about him, The Horned King takes it as a challenge to outmatch his sorcery, and prove who is better at control.
Campaign Heroes: Magica, Oogie Boogie, The Evil Queen

Friendship Disk: A Glare in the Sand (Cursed Fireballs)
+X Skill Power
Appearance: A snake eye covered in sand.
Cauldron Calamity steals a total of X HP across all enemies, and curses them for 3 seconds. (+2 per star)

Victory: Raises his arms up, his eyes glowing.
Defeat: Gets sucked into the cauldron.
Entrance: The cauldron glitches in, as The Horned King walks in and awakens its power.

Victory: Strikes its shield with its sword.
Defeat: Crumbles apart.
Defeat (When a new Cauldron Born is summoned): Self destructs into an enemy.
Entrance: Climbs out of the cauldron, and takes out its sword and shield.

Victory: Claps and jumps around excitedly.
Defeat: Chokes himself.
Defeat (When The Horned King is KOed): Looks back and screams.
Entrance: Hops onto the battlefield.

this is just amazing. 9.5/10 more people need to see this

It’s a reference to a scene where the Horned King is about to punish Creeper by choking him, but Creeper does it for him.

I love this great work!

I love this concept. I think one of the the attacks should be “Send the Gwysenths!” and his pet dragon attacks.

Welcome to the forums! Sorry the post was flagged. In the future, do not revive dead topics.

UPDATE: This concept has now been reworked!