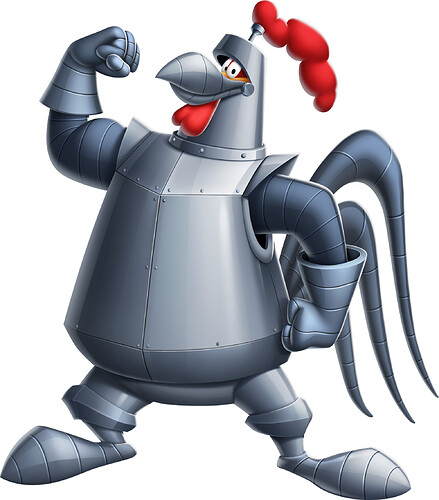 Foghorn leghorn decided to wear a whole suit of armor over his body, this allows him to soak up damage and reflect projectiles with ease to protect his allies

Entrance: foghorn the invincible walks into the battlefield

Defeat: foghorn the invincible turtles into his armor as it falls down

Passive: when entering each round, foghorn gains X armor, X max HP and reflect for the rest of the battle.

Active: Foghorn turtles into his armor and throws himself into the enemy with the most buffs, this deals X damage to the target enemy and steals 3 buffs from the enemy.

If one of the stolen buffs is reflect, then he will also gain invincibility for 10 seconds which also makes him immune to knockbacks until the invincibility ends.

Foghorn gains a single wheel at the bottom of his armor and two maces to replace his arms then he rides towards three random enemies to ram into them, each drive-by deals X damage and steals a single buff from each enemy chosen.

This move will also steal 45% armor from each target enemy.

Foghorn sprays and wipes his armor to make it shiny, this grants him 45% armor and he also gains reflect for 10 seconds

If foghorn already has reflect, then he gains invincibility for 5 seconds instead.

Each 10% of armor given to foghorn now also increases his crit power by 10% per amount of armor he has.

All invincibility on foghorn and his allies now lasts 3 more seconds.

Each reflected attack now cleanses a debuff off of the ally that is reflecting an attack.

I don’t necessarily think this is wrong, but Wave is usually used

Also what is he from? (I was gonna say DuckTales,but I saw it was unlikely)

Now that I think about it,makes sense

Has Foghorn ever worn this armor in a short or anything? I don’t remember this at all, lol.

If not then they did a great job of photoshopping it

(No…this version of foghorn is from looney tunes: world of mayhem which is a looney tunes mobile game)

Oh yeah I remember that game

I looked that up. Thanks for clarifying. Fun concept though. Foghorn is hilarious.

There will be more concepts based off world of mayham characters in the future…and then there was another!!

Who do you want to see next in my world of mayham collection?

I heard that they added the fat Bugs bunny. And I want that.