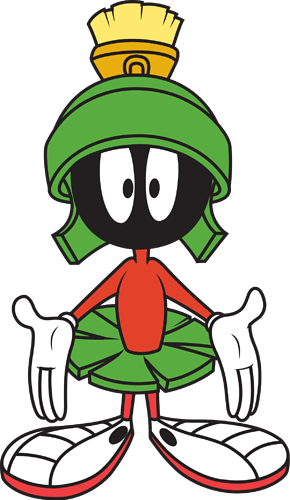 “Where’s the kaboom? There’s suppose to be an earth-shattering kaboom!”

This martian carries ray guns, dispatchers and other powerful weapons to deal massive damage to anyone in his path

Entrance: a spaceship door opens off-screen (with a light coming off-screen to show it off) then Marvin walks onto the battlefield with his A-1 disintegrating pistol in his hands

Victory: Marvin looks at the screen as he points to the sky

Defeat: Marvin gets mad as he taps his foot on the ground repeatedly

Active: Marvin activates his ultimatum dispatcher which then extends a mechanical hand holding on to a stick of dynamite which then explodes, dealing X damage to the frontmost enemy.

Marvin activates his space modulator which fires a beam into the middle of the enemy team, dealing X damage to each enemy in the blast zone, stunning each enemy for 10 seconds and sapping each enemy the beam hits

The stun and sap cannot be removed by any source, doing so will result in the enemy that tried to remove the sap or stun being dealt the same damage and effects of the skill.

When Marvin or his allies deals more than 15% damage per the enemies max HP, the cooldown of each allies blue skill is decreased by 100%

This can only be activated every 5 seconds.

The cooldown reduction might fail for allies above LV Z

Whenever Marvin defeats an enemy with “Space modulator” or “Ultimatum Dispatcher”, all his attacks are now guaranteed to crit against enemies for 15 seconds.

Whenever his skills are cooled down, Marvin now gains X critical power and X skill power for the rest of the wave.

Marvin gains 20% skill power and attack power for each buff that is given to him.

Marvin is immune to damage from critical hits and instead heals himself and gives himself X skill power whenever he is hit by a critical attack.

Wait, so you basically don’t want to level the blue skill at all?

Whoops…glad you caught that for me!!

Shouldn’t the damage be a constant value(like 25% of the Max HP, for example) and the variable be somewhere else? If you just keep it at level 1, it could basically be activated indefinitely, unless you make his own skill an exception

You mean how much damage Marvin or his allies have to deal in order to activate the cooldown decrease?

Fixed it again!! Is it any better?

Yeah, now it only needs a variable

Yeah, a number that varies along with the level of the skill. “The cooldown reduction might fail in allies above level Z” is an example for that