Before I start, I just want to let you know that Citron and Gumball Cookie will be released consecutively from today. I want to finish them up so that I can focus on other concepts and more importantly school. They might be a bit rushed, but I still have plenty ideas for them. I hope you understand. 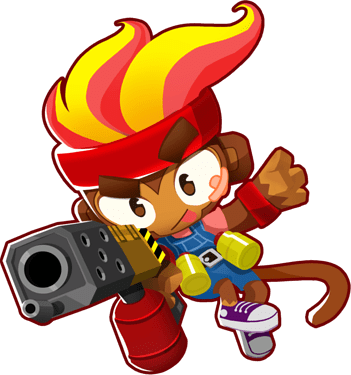 “With enough fuel in the air, everything burns!”

Gwendolin, the pyromaniac, shows her enemies that there’s no problem yet to be solved with fire. Lots and lots of fire.

Role: Damage
Position: Mid
Trial Team: Blue
Entrance: Jumps into position and gets her flamethrower ready
Victory: Jumps up and kicks
Defeat: Tries to throw a flaming cocktail but it explodes on her
Attack: Shoots a flame from her flamethrower

Green Skill: Flaming Cocktail (Fantastic Damage)
Gwendolin throws a cocktail of fire at the back most enemy, dealing X damage to them and blinding them for 7 seconds. If the enemy is already blinded they take an extra X damage.

Blue Skill: Heat It Up
Gwendolin creates a powerful fire wave which blinds nearby enemies for 6 seconds and granting allies X skill power and causing their basic attacks to deal X damage per second for 3 seconds. This boost on allies lasts for 7 seconds.

Purple Skill: Burn It (Fantastic Damage)
Gwendolin’s basic attacks now set enemies on fire, burning them for 3 seconds which deals X damage per second from this skill. If an enemy is already on fire, the damage is increased by 100%.

Red Skill: Everything Burns
“Heat It Up” also converts debuffs into stacks of “Hardy”. Each stack of “Hardy” blocks one debuff being applied and is then removed. Gwendolin can convert up to 4 debuffs into “Hardy”.

Debuffed enemies take 5% of their Max HP as damage per second while debuffed. If they are debuffed again, the damaged is doubled.

I can be a pyromaniac sometimes (mostly with pyrotechnics like fireworks and stuff) so this concept is great and funny.

They kinda sound the same, but great concept! 10/10