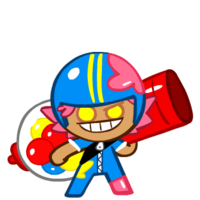 Armed with a loaded Gumball Cannon, Gumball cookie makes a colorful canvas on the battlefield while causing sticky situations for the enemies.

Role: Control
Position: Middle
Trial Team: Red
Entrance: Walks into position and gets his Gumball cannon ready
Victory: Blows a bubble and starts to rise a bit
Defeat: Falls over as a Gumball lands on his face
Attack: Shoots out a Gumball at an enemy.

White Skill: Colorful Canvas (Fantastic Damage)
Gumball Cookie fires 7 gumballs at the enemies, dealing X damage and stunning them for 2 seconds with each Gumball and slowing their attack and movement speed by 60% for 7 seconds. This deals X more damage every 3 times an enemy is stunned.

The slow has a chance to fail against enemies above level X.

Green Skill: Stick To It
Gumball cookie chews on gum, healing him X HP and gaining 300 energy. He blows a bubble and then it pops, stunning the 3 closest enemies for 6 seconds.

Blue Skill: Dazzling Colors (Fantastic Damage)
Mini Jackson No.2, Gumball’s pet, fights along side him for the battle. He has X HP and deals X damage with each attack. Every 7 seconds, he unleashes blasts of lasers at the enemies, dealing X damage and blinding them for 10 seconds.

Purple Skill: Popping Up
Every 3 basic attacks, Gumball Cookie and Mini Jackson No.2 slows the targeted enemies attack speed by 40%. This deals X more damage if the enemy is already slowed.

Red Skill: Wonderful Masterpiece
Gumball Cookie gains X skill power each time an enemy is disabled. This is reduced by 50% when carried from wave to wave.

Every 3 times an enemy is slowed, Gumball gains an extra Gumball with “Colorful Canvas”, up to 7 more Gumballs. This buff is carried from wave to wave.