Hello, guys! Welcome to a little game I created called “The Resurrection of Don Taco”. This is a little project that I’ve been working on all week. I was inspired to create this game/story after someone intentionally slaughtered a friend of mine, Don Taco. 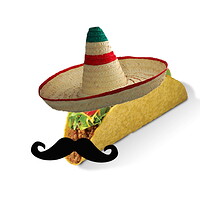 They know who they are.

You will be playing as yourself in this story. If characters mention your name, they’ll say “[YOU]” instead.

So how it works, is that in every chapter of the game, there will be multiple puzzles (and ciphers) for you to solve.

Every time you think you’ve solved a puzzle, be sure to @ me so I can verify your answer.

These chapters are all centered around either a series, a game, or a musical “artist”.

Okay, I’ll shut up now. Here is the first chapter of the story. There will be no puzzle until tomorrow, this way you can ask some questions before the game begins.

Chapter 1: A Disturbing Knock at 3 AM

You hear a loud knock on your door.

You hear the knocking again, this time it’s louder than before.

You get off of your bed, slide on your slippers, and put your robe on. You trudge to the door, a little annoyed. You pull the door open. It’s a boy. No, a teenager. He was carrying a backpack on his back, with one strap on his shoulder. The other strap hung lose.

You rub your eyes.

Jack hands you the ad. It’s true. Your name is on an ad for… ugh… puzzle-solving. You wonder how this happened…

Jack: (enticingly) I’ll pay you a good amount of money.

Jack takes out a bag full of gold coins. “That will certainly help with the debts”, you think to yourself.

You: Alright, I accept. This better not be a trick or anything.

You let Jack into your home, and offer him a seat while you dress up and prepare your coffee. Jack sets his backpack on the floor. Once you finish preparing your coffee, you sit down in front of Jack.

You: So what’s the deal? Do you want me to help you with crossword or what?
Jack: Umm, no. Recently, a close friend of mine passed away when he was swallowed up by a wave of water. I tried to rescue him, but by the time I tried, it was too late. He was already soggy and mushy.
You: Soggy?-
Jack: He’s a taco. Don’t laugh. Its not his fault he got trapped inside of something so appetizing. Before his death, he used to be a good friend of mine. We would talk for hours on end. Until… we encountered a monster by the name “Quagsire”. The monster felt insulted by Don Taco’s words, and summoned a powerful wave of water to destroy him. I miss him. I just need to resurrect him to bring him back.

You think to yourself, “Great, he’s crazy. How did he even get all that money?”

Jack: I know it might seem crazy, but… please. I need your help.

After a few moments of silence, you decide to help Jack out of pity.

You: Alright, I’ll help. How will we resurrect him?
Jack: We need to retrieve five relics from around the area. It should be easy. With your help, that is.

If you think my story-writing is bad, it probably is. I’m a little new to this kind of stuff

someone intentionally slaughtered a friend of mine, Don Taco

That person must be really bad, right. I wonder who they are

What did he say to insult a Quagsire? They are mostly Unaware of their surroundings. 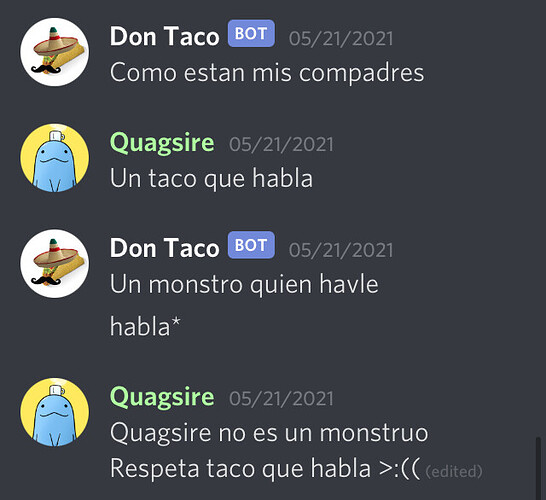 I mean, Pokémon are Pocket Monsters, so Don Taco wasn’t all that wrong. A truly unfortunate fate

Anyways, can I draw Don Taco into human form?

I dunno, I kinda like him as a taco

But I can try. I’m just asking you for permission.

Go for it, if you want

You kind of did stuff when I had my game, and this looks interesting, so I will give it a go

Is the prize free tacos?

No. That’d be disrespectful

How about the taco’s sworn rival? Free burritos!

Reward
2 pounds of Quagsire meat for everyone!

Thanks for the inspiration!

Isn’t your usual Quagsire slander enough, now you want to sell its meat