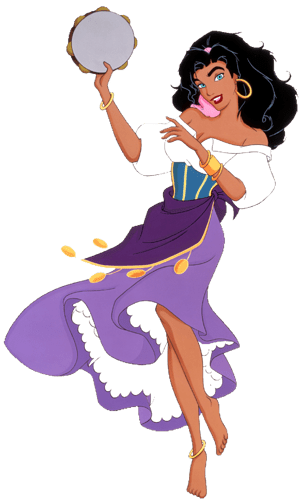 “You speak of justice, yet you are cruel to those most in need of your help!”

Entrance: Esmeralda walks in with her tambourine in hand

Victory: does a short dance and then winks

Defeat: falls to the ground then gets a shocked look on her face

Defeat(Djali): he gets a shocked look on his face

Basic attack: she shakes her tambourine, healing herself for x amount each time she plays.

Esmeralda calls Djali who then charges in and headbutts the nearest enemy, dealing x damage and also dealing knockback to the enemy hit

Djali will then remain on the battlefield to fight with Esmeralda for the rest of the wave. Djail has x health and x attack power.

When Esmeralda is under 40% of her max health, she sneezes into a blue handkerchief and then dissapears in a puff of pink smoke, turning herself invisible for 6 seconds and increasing her armor while she is invisible by 80%

Esmeralda is now immune to all disables while she is invisible.

The invisibility from “magic sneeze” lasts 2 seconds longer per star

Esmeralda’s basic attack now clears her of a single debuff every third time she plays the tambourine.