The rival to the other duck (unlikely concept 22) 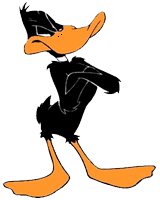 Daffy duck makes use of hypnotism as well as stuns and armor stealing to make the battlefield a little more loonier!

Entrance: daffy walks into the battlefield backwards while stamping fake wabbit footprints onto the ground then he turns around and throws the supplies away

Defeat: daffy crosses his arms and sticks his tongue out while he has his eyes closed

Green: in the spotlight

“Hypno-daffy” now steals armor from the two enemies he charms and steals energy from the three enemies he stuns with the skill.

Daffy takes 90% less damage from enemies who had their armor stolen by daffy during “hypno-daffy”.

The enemy effected by “spotlight” now has their armor reduced by 50%.

daffy and donald has renewed their rivalry but it goes too far when they end up accidentally destroying the park while trying to one-up each other.

Daffy now shares 30% of the armor he steals from “hypno-daffy” with his allies.

Daffy/Gaston
Not this season
More power per health

its duck season in the city and daffy is pulling all the stops to not be dinner for a hunter but a certain egotistical hunter will not stop until he gets a kill.

Daffy’s attack power increases overtime by 20% for how much max health he has in the wave.

That’s is just like in Who Framed Roger Rabbit. 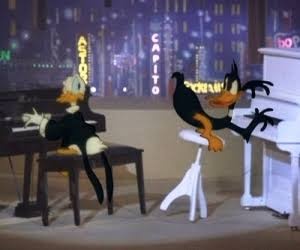 That’s the idea behind the friendship

Where were you using my Daffy Duck Hero concept

My one came out in May

Okay fine i’m not trying to revive this dead topic