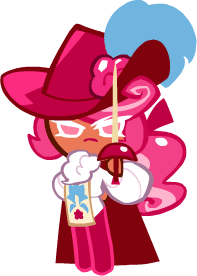 Wielding excellent swordsmanship, Raspberry Mousse duels with his enemies, for the honor of House Raspberry.

Role: Damage
Position: Front
Trial Team: Red
Entrance: Walks into battlefield and gets his sword out.
Victory: Raises his sword up high
Defeat: Puts his sword down in dishonor
Attack: Slashes enemies with his sword

White Skill: Challenging Duel (Normal Damage)
Raspberry Mousse strikes at the three front most enemies, dealing X damage to them. He then parries the strongest enemy on the team, dealing damage equal to a critical hit to them.

The chance to Super Crit an enemy with this skill increases by 1% for every 1% HP removed by the previous enemy.

Green Skill: Graceful Parry (Normal Damage)
Raspberry Mousse parries the frontmost enemy, dealing X damage and knocking them back. This deals X more damage with each subsequent use and ignores all armor on enemies.

Blue Skill: Raspberry Reprise
Enemies damaged by “Challenging Duel” will receive his mark for 7 seconds. Marked enemies with receive 50% more damage from basic attacks and attacks against them cannot be reduced by armor or reality.

The “Mark” effect has a chance to fail against enemies above level X.

Purple Skill: Living For Duel
Raspberry Mousse gains X basic damage each time he uses his active. This buff is carried from wave to wave.

Red Skill: Symbol of Knighthood
Raspberry Mousse shares 50% of his basic damage with his allies.

Marked enemies lose X armor. If an enemy receive a mark while already marked, they take 75% of their starting armor as damage.

When I saw the topic’s title…

Yeah, I expected you to react to the title.

Hoped you liked it!

When I saw the topic’s title…

I thought I was the only one.