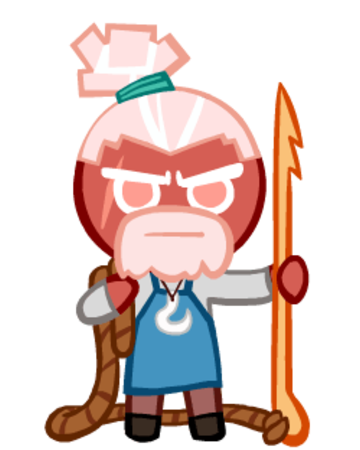 “Life is tough. But it’s worth living!”

braving the rough monster filled oceans of the cookie world, salt cookie arms himself with his trusty harpoon to defend himself in the battlefield

Entrance: salt cookie sails into the battlefield in his boat (he remains stationary on his boat in the frontlines)

Victory: salt cookie wipes his forehead and sighs in relief

Defeat: salt cookie takes a knee as his hair falls down on both sides

Salt cookie throws his harpoon at the backmost enemy then he pulls the enemy into the frontlines while catching a couple of fish along with the enemy, this deals X damage to the enemy and stuns them for 5 seconds while the skill also heals salt cookie for X amount.

Every third basic attack, salt cookie instead throws an ice harpoon instead of his regular harpoon. This deals X damage and freezes the target enemy for 10 seconds.

When salt cookie is about to be ko’ed by any enemy, lifesaver (salt cookies pet) heals salt cookie for X amount, deals X damage and knockback to the attacking enemy and steals X energy from the enemy.

“Fishers harpoon” now gives salt cookie X armor and X attack power whenever he is under 40% of his max HP.

The effects of “lifesaver” can now be applied to the weakest ally who is about to be ko’ed.

“Ice harpoon” now deals continuous damage for the same duration as the freeze.

“Fishers harpoon” now heals all allies for X amount while also increasing the amount of healing done to salt cookie by X amount.