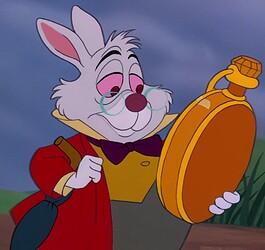 No matter how much time the White Rabbit has, he’s always on a time crunch, rushing through both allies and enemies to get where he needs to be.
Trial Team: Blue
Role: Midline Control
Stars:

Green Skill - Tick Tock
the White Rabbit jumps in panic, accidentally dropping and breaking his watch, which slows all enemies’ attack speeds by 70% for 6 seconds.

Blue Skill - Clockwork
the White Rabbit winds the knob on his clock, giving allies X additional energy and increasing their attack speeds by 45% for 8 seconds.

Purple Skill - a Real Important Date
Each time the White Rabbit performs his “Rush Hour” skill, he steals X Skill Power from each enemy he hits. His armor and max HP are increased to X.

Red Skill - No Time to Say Hello
the White Rabbit’s “Tick Tock” skill also affects charmed allies. After their charm time is up, the skill effects are removed from that ally.

Friendships:
the White Rabbit + Genie
Campaign: Right On Time - Genie notices the White Rabbit in a traffic jam, wishing that he was never late for anything. Genie fulfills his “wish,” allowing everything in the White Rabbit’s way to clear a path and help him get where he needs to be all the time.
Disk: All of the Plus Column
Disk Memory: the White Rabbit’s “Rush Hour” skill deals X extra damage to enemies with an active shield.
Disk Power: Z energy gain
Allies: King Louie, Mr. Big & Koslov, Shank