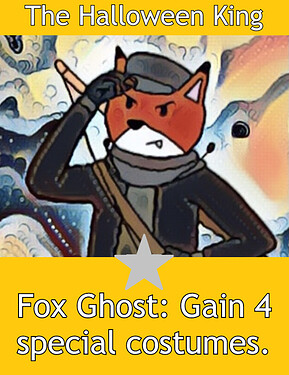 A bell tolls on Halloween night. Spirits rise, and the ground cowers. Magic is unleashed, giving all a fright. Costumes are filled with unknown powers. Join the games, if you might!

Each costume has an info card with the character’s name, picture, and special power. In addition, the color of the card signifies the costume’s type. Grey for normal, blue for rare, purple for special, and black or lime for super special.

You can either use your costumes to trick-or-treat and gain candy, or use their costume power for a unique effect. The amount of candy you get from trick-or-treating with a costume varies with its type: 1 candy for normal, 2 for rare, 4 for special, or 8 for super special.
Trick-or-treating or using a costume’s special power will use up the costume’s magic, making it an unusable trinket.

Whenever someone loses candy, it’s added to the cauldron. Stolen candy doesn’t count for this. Certain costume powers make use of this.

Whoever has the most candy on November 1st will be crowned Halloween King and made into a costume.

5 candy: Dupe Drop. Choose a standard or rare costume to be dropped again. This doesn’t guarantee that you’ll get it.
6 candy: New Non-Disney Costume. Choose a non-Disney character for me to make a costume of. If there are multiple requests when the 500-post drop happens, I will choose between them randomly.
7 candy: New Disney Costume. Choose a character for me to make a costume of. Must be Disney/Pixar. Does not guarantee that they’ll drop immediately, particularly if I decide to make them a special costume.
10 candy: Guaranteed Costume. Instantly gain a standard or rare costume of your choice. You are given it instantly, and it does not drop.
17 candy: New Concept. Choose anything or anyone (Disney characters, non-Disney characters, random objects, abstract concepts, you, anything). I’ll post a concept of it.

More options to be added in the future.

I invite you all to chat with each other here while you wait for costume to be dropped.

Wish you the best of luck PawpsicleSticks in terms of the Trick and Treating post and hope you have fun organizing it all :-).

Best of luck to everyone who participate and hope this post can be a fun addition to the Halloween related forum activities ^^. 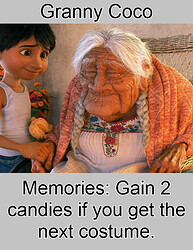 Standard costume, first to reply gets it!

Why not Mama Coco? 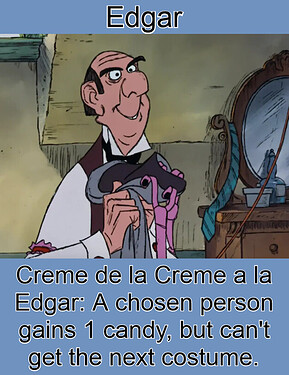 The villainous Edgar’s costume is here! Rare: the 25th post from now gets it (#33)

I like how literally no one else commented after this was posted until now.

So we can just converse about anything?

If you’re looking for a conversation starter, who’s your favorite villain, and why? Doesn’t have to be Disney.

It’s me because yes.

Your Majesty, Queen of Hearts. I believe i like other villain (It probably isn’t from Disney) more but she’s the first that came to mind.
I like her design and her obnoxious personality is fun to see lol.

who’s your favorite villain, and why? Doesn’t have to be Disney.

I know you’re not limiting it to Disney, but I’m doing so voluntarily anyway, because otherwise the possible choices are so many and so diverse (Jei-san? Harry Lime? Liberty Valence? Aku? HIM?) that I can’t narrow it down to one. Even with that voluntary restriction, I’m picking two, one for entertainment value and one for pure evil.

Disney has had no shortage of entertaining villains, and there are a handful of other candidates I could have chosen for this honor, but in the end I have to go with Hector Barbossa of Pirates of the Caribbean: The Curse of the Black Pearl. It can be argued that the sequels turn him into some form of anti-hero, anti-villain, or true neutral, but there’s no doubt he’s the villain of the first film, and Geoffrey Rush relishes the chance to take on Johnny Depp in ham-to-ham combat, chewing enough scenery to last any normal actor a lifetime.

For the most evil Disney villain, though, there’s only one choice: Mother Gothel. Yes, I know there are more demonic, even Satanic, villains in Disney’s stable, but starting from her first “joke” belittling Rapunzel she made my skin crawl. The way she constantly undermined Rapunzel’s self-worth while coating her venom with the thinnest veneer of motherly affection was truly vile – and all the more horrifying in how it reflects countless toxic parent/child relationships in the real world.

your favorite villain is sand man