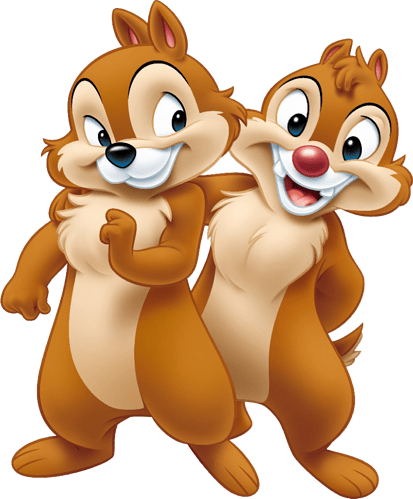 “If we go any slower, we’ll be going backwards!”

Entrance: a tree is already in the battlefield and then the two chipmunks scurry out of the tree as it then dissapears (until B0)

Victory: a pile of acorns appear as chip and dale grabs some from the pile and munches on them

Defeat: a dazed chip falls down as dale tries to get him back up

Chip and dale try and bite into a rubber cement pancake which then they stretch the pancake until dale loses his bitting grip and then the pancake goes flying towards the enemy with most HP, dealing x damage to that enemy and also dealing small knockback

At the start of each wave, chip and dales entrance gets replaced with them flying through the enemy team aboard the rangers plane from rescue rangers before then scurrying to their position from the left side of the screen, the plane deals x damage to each enemy it hits.

Chip and dale now prefers to target enemy’s with the lowest stats with “two for breakfast” which deals a 40% more powerful knockback to that enemy.

“Acorn stampede” decreases the armor and attack speed of enemies per stack of “nutty” the enemies have when the skill is activated.

chip and dale once again gets on donald nerves by stealing his food which leads to a wild chase through the city.

“Acorn stampede” now heals all allies for x amount per stack of “nutty” that each enemy was inflicted with during the wave.

basil needs help on a tough case and so he asks chip and dale to go back to their days as rescue rangers in order to help out.

Each stack of “nutty” now decreases 20% armor per stack inflicted to enemies.

@IAmASnowySpongeYo I already did kermit