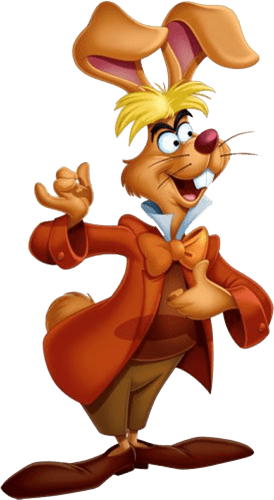 “I have a excellent idea! Let’s change the subject.”

a wacky rabbit who loves unbirthday parties, the march hare orchestrates teapots to cool the enemies steam and changes the subject with his giant mallet

Entrance: march hare literally jumps into the battlefield then pulls out a teapot and holds it in his hands

Defeat: march hare gets scared and tries to offer the enemy a cup of tea

Basic attack: steam blows out of the teapot in march hares hands, dealing x damage to the closest enemy and also giving march hare a stack of “scalding” which increases the damage dealt by “steam symphony”.

Green: sticky situation
(Fantastic damage⚡)
March hare flings a glob of jam at the enemy with the highest amount of buffs, dealing x damage to that enemy while also slowing the movements of the target enemy by 130% for 9 seconds.

March hare bonks the enemy with the HP lowest then 40% on their head with his giant mallet, dealing x damage to the target enemy and also either stuns the enemy for 10 seconds or confuses the enemy into attacking their teammates for 7 seconds.

March hare gains x max health and x armor for everytime he blinds or stuns a enemy with “steam symphony” or “change the subject”.

confuses the enemy into attacking their teammates for 7 seconds.

That would be charming, but I see where you were going. Maybe silencing would be better.