I was having the same issue. Evidently the Google Play store changed where you go to do your updates. You have to go to a separate page from your app now. Click on your name initial in the top right corner of your play store main page n it’ll give you a drop down menu. 1 of the options is updates. #changeforchangessake

The game had a stroke

The Megabit drops from The Codebase are the same as they were for Y1 and Y0.

Also, this screen seems like it could use some improvement - 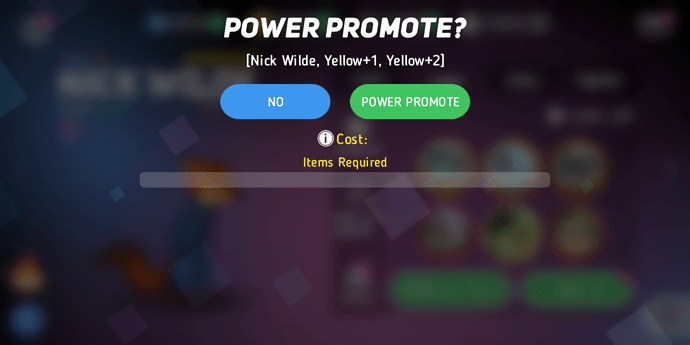 It shouldn’t look like that.
We’re having an issue with our text display. This is the same reason the dialogue is missing from the friend walls.

OK, the game probably did have a stroke here.

I think it it trying to apply a color to the 0, but somehow failed.

I see and thanks for letting us know Polaris.

Do you think the Text Display can be fixed today or something that need longer time?

Do you think the Text Display can be fixed today or something that need longer time?

I don’t know. The team is still tracking down what’s causing the issue.

I see and yeah, appreciate that you let us know :-).

Not sure if it’s a bug or intended, but power crafting is now using all banked stamina refills.

Nope, that is not a bug.

This new feature will help save you a lot of time promoting heroes by automatically using the items and resources you already have onhand, including Stamina consumables!

Nope, that is not a bug.

Well that sucks. It should be able to be disabled. I have a f2p account and the only way I can keep up with the level cap is to hold them all until the update. Lots of people do that. Plus people wait for double drops.

Hey @Polaris, I think there’s a bug with the skill level slider.

The text where it says ‘Level X’ when you slide the bar turns red even though I can afford it. I can still do the upgrades, it’s just a display error I think.

Edit: Actually it’s not just display. I put the slider to 170 and it only went to 145 saying not enough skill points, even though I had enough. I slid it to 170 again and then it worked.

It might actually be for F2Ps better to instead combo grind as in trying to get as many useful badges at once that you need or are low on :-). By that I mean going for good grind spots such as these that give you a fair amount of badges you need a fair amount of each:

Something I really recommend doing and helped me a lot I think :-).
I manually craft and do Max Raid and such, that way can more easily choose exactly which stage/badges I want to grind for in order to maximize my stamina :-).

How do you make the videos?