Now they’re once again together!

I just hope their stats won’t ruin the hype.

Loving it. A lot of time saved

Loving it as well… but won’t be used frequently, it still takes months to max a red skill

Toned down Basil’s VFX a little. His skills have not changed; he just won’t be quite so spammy with his visuals.

How it will look if he literally spams his white skill?!

I hope this means no more Muppets… too much.

I hope badges will be good… Y1 gave quite few good ones, I hope these will be used on more than just Finnick (barely changed anything, 250 evasion is nothing) and Zurg.

Russell & Kevin will only be available in Diamond Crates

The skillset actually seems interesting and simple, I’m excited, they seem quite fun.

Red team is becoming stronger and stronger. Nice hero to see, but one gots to make choices.

Luckily I’m not VIP 5, cause this wouldn’t be something I would want. Misclick and lots of stuff spend…

Not bad, but also unnecessary…

This is something that looks great! I don’t do Epic CW much due to wards, but got a lot of keys. Being able to choose which heroes you would like chips for is also a great plus!!!

Hooray here as well!! Especially for port, I will be able to climb some levels!

New work to be done, with undeveloped heroes…

Not great, but we knew…

Best update I’ve seen! I’ve waited for another up character to come and now we got 4 up characters

Ok @Polaris is this the real percentage? Because this is depressing at a 1.2% increase maxed 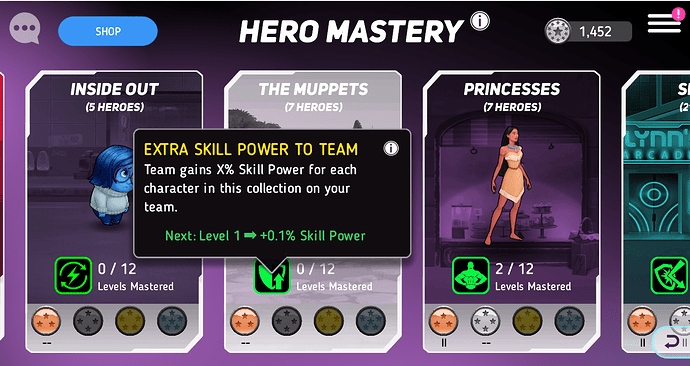 Don’t you have Tron in two already? Like 18 and 19 or something

Nope. His chips are only available in one level

The wilderness must be explored

Bruh… I knew Kevin is coming

You gotta love the quick promote, it’s like part of VIP 5 but for free!

Anyway, one thing to say, not a fan of chubby kid and bird at all.
Two, no Megabit scaling, Battle Badges are doomed.
Three, no balancing of cost issues of badges (yet?) - I personally WANT to see that one handled for Power Promote even being impactful. 600 stamina consumables at double drops from Orange to Red and another 6000 from Red to Yellow is just too much.
It wouldn´t be enough if the free stamina was higher but nada.

New! Russell & Kevin from Disney and Pixar’s Up!

Interesting character, wakkatu says the duratation of the energize is pretty long

Not at red so

Revive once per wave thing is great though

That’s cool we’ve got to see another character from Up. Russel and Kevin.

None of these improvements are exciting to me in the slightest; not even moderately interesting. I’ll never have the need for a Red Skill slider or a Power Promote, and I’m sure neither will 99% of the player base. Being able to dump $100s worth of resources with 1 button press is a frightening thought.

I’ve never seen the error when enhancing Battle Badges as I’ve only ever tried to use the free one since the cost is ludicrous.

I won’t raid CW either as I usually want to cycle more than 5 heroes in & out. I assume it will still be possible to battle it manually? Are raid tickets even going to be required for raiding it?

That’s a shame, I found it useful in reminding me to enter Surge to check for the 3rd or 4th time whether my rewards from the previous day had dropped yet.

Are raid tickets even going to be required for raiding it?

It says you only need epic keys…

None of these improvements are exciting to me

I can agree with this, it takes too long to max red skill, epic CW is “available” every 3rd day and hero chips won’t appear from nowhere.

I hope at least skill chips from epic CW will be doubled really soon, it will make these changes actually useful.

Russell & Kevin are a front-line “Support” duo on the Red team.

Russell & Kevin will be available in Diamond Crates.

Yes, yes, it’s nice that they’ll be readily available to most players, but are we ever going to see Slinky leave his crate?

It will still choose the campaign locations to raid in order to be as efficient as possible and will simulate power crafting the badges you need.

So, if you need bits for badge X to promote to P1 and for badge Y to promote to O4, will the game be smart enough to raid a node where both bits are present, even if one of them isn’t featured on the screen when you go to the node? E.g., could it go to 30-4 if you need Sea Duck, Little Helper, and Blank Check bits for different ranks, or will it seek out three different nodes for those bits? And what about Craft All?

Now Power Craft will use any Stamina Consumables you have in your inventory when determining if you can afford to Power Craft a badge and will spend them for you.

Great news for those who keep well-stocked in Stamina Consumables at all times; a horrifying trap for those of us who have to carefully hoard them to spend only when there’s a double drop active. Will there be a way to opt out of this feature?

Whenever you enter an Epic difficulty raid, you’ll be asked to choose up to five heroes at Red Rank or above to potentially receive Red Skill Chips for.

I admit I had my doubts that PerBlue would do something this simple, straightforward, and unreservedly beneficial to players; thanks, this looks like it might be the best change since the invasion tier requirements were lowered!

Finally; it’ll be nice to try out the new levels as soon as they’re released, rather than waiting until I’ve maxed my team level.

No Tron? I hope he’s returning to the shops soon; there’s absolutely no way to work on his red skill if he’s available on only one Elite Campaign node. Even having a hero on two nodes, like Timon & Pumbaa, is somewhat restricting.

Overall it looks like a good update; I just hope there’s a way to turn off Power Crafting using Stamina Consumables, though I suspect I’ll just have to train myself to pay attention to the costs and my stamina supply.