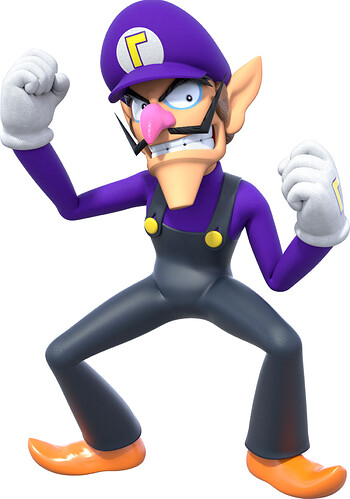 Entrance: Waluigi runs into the battlefield before then stopping and pointing at the enemy team then pulling out his tennis racket

Victory: Waluigi laughs as he looks upwards with both arms raised

Defeat: Waluigi crouches as he then puts his hand over his forehead with a disappointed look on his face

Waluigi kicks the nearest enemy 6 times before then hitting the enemy with one last hard-hitting kick and dealing X damage per hit, knocking the enemy back.

Waluigi hits the nearest foe at full force with his tennis racket, dealing X damage to the foe, knocking the foe back and stunning them for 10 seconds.

If the foe is already stunned, they are instead inflicted with 2 stacks of fatigue.

Waluigi pulls out his dice block and hits it from below which makes it land on -3, this deals X damage to all foes, steals up to 30% energy from each foe and gives it to random allies.

If an enemy is fatigued, the energy stolen is increased by 15% per each stack of fatigue on an enemy.

Energy stolen is less effective against enemies above LV Z

For each stack of fatigue on an enemy, Waluigi gains 30% attack speed and 30% crit power.

“Game, Set and Match” now halves the reality of the target enemy if they have more than 3 stacks of fatigue inflicted on them.

Waluigi heals himself and the ally with the least health for X amount every time that he deals damage to a fatigued enemy.
+X damage to “Coin drain”
+X skill power
+X crit power