What a beautiful slice (Likely concept) 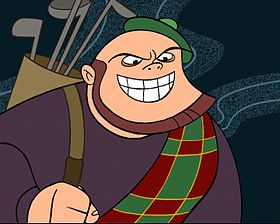 “What a beautiful slice!”

Entrance: Duff killigan appears in the battlefield disguised as a portrait before he then ditches the disguise and readies his golf ball and golf club for battle.

Victory: Duff killigan jumps up and clicks his legs on both sides of himself

Defeat: Duff killigan misses the golf ball with his swing leading the ball to blow up in his face and causes Duff to fall onto his chin

Basic attack: Duff killigan hits a exploding golf ball with his golf club which flys and explodes when it hits the nearest enemy, dealing X damage.

Duff killigan bombards the enemy team with a huge amount of golf balls. dealing X damage to each enemy the golf balls hit, knocking each enemy back and having a 40% chance to stun each enemy per each golf ball aimed at them.

Whenever an enemy gets into close range of duff killigan, duff pulls out two golf clubs and strikes the enemy with them, dealing X damage and knockback to the close ranged enemy and also applying two stacks of “weakness” to the foe.

Blue: Rain from above (Fantastic damage)

Every 5 seconds, four golf ball cannons fire exploding golf balls onto the enemy team, dealing X damage to all enemies, decreasing their armor by 60% and applying 2 stacks of “weakness” to each enemy.

“Beautiful slice” now deals 20% more damage to enemies that has more than 3 to 4 stacks of weakness on them.

The chance to stun with “Beautiful slice” is increased by 30% If the enemy has more than 5 stacks of weakness on them.
+X skill power
+X damage to “Golf strike”
+X armor

Stuns dealt out now lasts 1 second longer per each stack of weakness on the stunned foe.

Story: Duff killigan and known troublemaker Randall boggs are planning something…but they are keeping it under wraps prompting some heroes to trail them for information which will no doubt spill out of the scottsmans big mouth

Story: Duff killigan challenges Ron to a golfing tourney while kim is busy with hero work…duff gets his “training” from his familar partner in crime randall boggs meanwhile Ron gets trained by known sports experts goofy and the unseen how-to narrator