I know that the game’s admins don’t intend to work with new costumes, but why not bring Belle’s dress, which is something that is part of Belle’s identity not only as a character, but also as a princess? bringing her dress wasn’t going to change anything about the fact that she was in the battle arena. why don’t you rethink it? 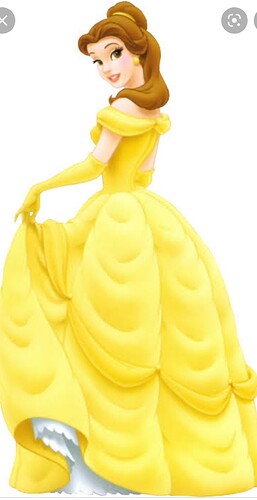 Nowhere, and it will not appear.

I still have hope, it’s not impossible.

No, devs literally said they won’t do costumes, and fighting in a dress is not ideal.

Hey, at disney sorcerer’s arena the belle fight with the dress. I don’t understand, not to mention that snow white is coming and she’s wearing her dress, what’s the problem. nobody cares about it.

And this is Disney Heroes: Battle Mode

Both games are run by two very different companies

PerBlue chose to use Belle’s normal outfit because it makes more sense in the context of the game, not to mention that it has more screen time than her ballgown outfit

Seriously, I don’t understand. should put it even if it makes sense or not, whoever wanted to put the costume on it her.

Seriously, I don’t understand. should put it even if it makes sense or not, whoever wanted to put the costume on it her.

Official statement from not only Loutre but also other staff: Making a costume takes as many approvals as making a new character. We did ask for more costumes, but you can clearly see which one is more viable considering… it´s still business.

fighting in a dress is not ideal.

Neither is fighting barefoot in most outdoor areas, yet look at Rapunzel - in a dress, with nothing on her feet.

Rapunzel spends the entire movie barefoot and in that dress and you actually see her ‘fight’ like that. Belle just dances in the yellow dress… not the same thing.

Neither is fighting barefoot in most outdoor areas, yet look at Rapunzel - in a dress, with nothing on her feet.

Rapunzel’s dress is way thinner than Belle’s gown. This allows Rapunzel to be way more mobile compared to Belle in her thick gown.

shows that she is indeed a princess

Except Belle and the Beast are from before they married, so she is technically not a princess yet

would make the most sense

I agree with the OP that the actual ability to do battle in said dress or not doesn’t matter at all, it’s a fictional game… we have ants the size of people lol and many costumes that aren’t particularly suited for battling. It might have been a consideration when she was designed, but it wouldn’t have been a deal-breaker. It was probably more of a theming decision - wearing the ballroom dress wouldn’t really fit with the theme of many of her skills.

Not adding it now is just a licensing a timescales issue, alt costumes took too long for PB to produce and presumably also cost a lot to get licensed/approved by Disney.

but it definitely won’t be now.

YES! not only Cinderella with her dress, but also Aurora and Tiana who are the only ones missing

so what u are trying to say is heroes with thinner clothes are more mobile, which helps them fight better in this game?

i just dont see why some people are talking about clothing and in-game fighting. There is no correlation, and there shouldnt be

In these types of games, function outweighs fashion. It’s just practical that way.

I won’t be surprised if Cinderella and Aurora don’t show up in ball gowns.