So something kinda major for me here: this is my first “stack” concept! With me doing Agent P a while back, I decided that there is no other character that I feel would be perfect for the “stacked” concept than Candace. Now, there are gonna be some moments where she might not seem the best so let me know then kay? So anyway, here’s Candace Flynn. 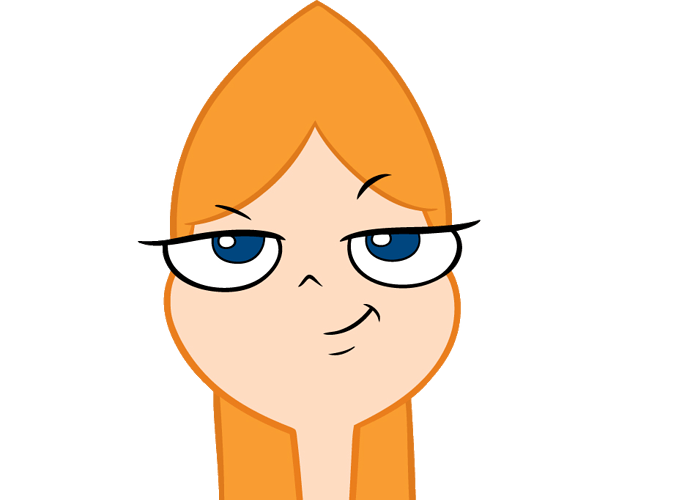 Candace_promotional_image_3942×2386 293 KB
Description: Cadence is very persistent when it comes to busting, thanks to having to deal with her brothers’ inventions. She stays on the attack and keeps her speed and determination up.

Quote: “You know, I used to think the universe is against me, but now I realize…it’s me against the universe!”

Entrance: Rides in on her bicycle

Defeat: Gets knocked back, prompting her to get on her knees

White Skill: Leave the Busting to Me

Passive: Instead of attacking, Candace instead spies on a random enemy. She does this every 6 seconds, applying a stack of Busted each time they are targeted. Enemies take X less energy from all sources, as well as X armor removed for each stack of Busted.

Active: Candace gets Linda to drive up and turns away from the enemies. While she is turned away, enemies take X damage over time, with X additional damage done for each stack of Busted and each Busted stack being removed afterward.

Green Skill: Squirrels in My Pants

Some squirrels surround Candace, causing her to launch herself onto the middle of the field and do X damage to all enemies, blinding them for 5 seconds. The blind has a chance to fail against enemies over Level X.

Candace tries to get a photo for proof, but pushes a wrong button, causing a flash that blinds and deals damage to all enemies. The blind has a chance to fail if enemies are over Level X.

As a persistent buster, she and allies gain 10% movement speed whenever they attack an enemy with Busted! until the end of the wave. This is less effective if allies and Candace are over Level X.

Whenever an enemy with Busted is defeated, Candace gains 10% movement speed for the rest of the battle. She also gains +X armor for each stack of Busted! on each enemy.

As long as there is an enemy with Busted! on the field, allies have +15% speed.

+X Damage in “Leave the Busting to Me”

Passive: instead of having a basic attack

Wait if she’s mid line why does she punch the enemy?

You should probably change the basic attack to see passive

Other then that decent concept 6 out of 10

Good to know! I really hate missing the most obvious of details sometimes, you know? Like you look over something but then there’s that one thing that you somehow miss? Anyways, thanks for the comment!