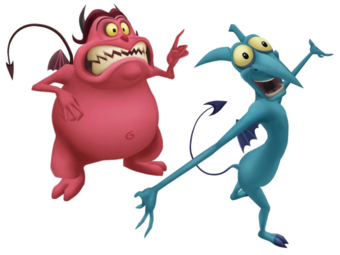 Entrance: pain and panic flys into the battlefield

Victory: pain looks at his shoes while panic admires them

Defeat: they both turn into worms

White: it wasn’t us

Pain and panic stack on top of each other and transforms into an enemy chosen by the player until their energy runs out. when they are transformed, they copy all skills from the enemy with the stats altered to match pain and panic’s stats.

Once they are out of their transformation, the enemy who was chosen to by pain and panic to transform into now has 2 stacks of fatigue inflicted onto them.

Pain and panic throws a mortal potion at the enemy with the highest amount of buffs, this deals X damage to the foe and also flips all of their active buffs into the opposite effect (speed increase becomes slow, hardy becomes fatigue, etc)

Blue: I thought they looked dashing

Pain shows off his hercules-brand shoes, increasing the duo’s movement and attack speeds by 100% for 10 seconds.

This move can only be activated once every 15 seconds.

“It wasn’t us” now copies all the buffs that were on the copied enemy with their duration refreshed.

“I thought they looked dashing” now grants 35% of the speed that is increased on the duo to nearby allies.