Wrath of The Red Dragon 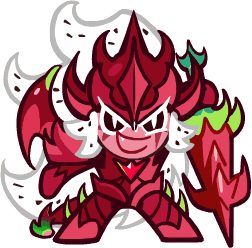 Hailing from the fiery fields of Dragon’s Valley, the legendary Pitaya Dragon Cookie engulfs the battlefield in flames, leaving his enemies terrorized for lands on end.

White Skill: Draconic Bladestorm (Fantastic Damage)
Pitaya Dragon Cookie begins to soar into the air and unleashes his Red Dragon form for 10 seconds. He will instantly heal 50% of his Max HP, deal X fantastic damage with his basic attacks, and increasing his basic damage and attack speed by 300%.

Pitaya Dragon can only use his basic attack and will receive 25% less energy with this skill.

Dragon Fruitling can only heal Pitaya Dragon Cookie once per wave.

Blue Skill: Flaming Flap (Fantastic Damage)
Pitaya Dragon dodged an attack or skill by guarding himself with his wings, increasing his armor by X and then flaps his wings, dealing X damage to that enemy and knocking them back at medium range.

Pitaya Dragon can counter once every 15 seconds.

Red Skill: Wrath of The Red Dragon
Pitaya Dragon is immune from 3 skills affecting him at the start of combat.

“Draconic Bladestorm” will deal 35% more damage to enemies who attempts to disable him.

The additional damage is reduced against enemies above level X.

Especially not a bunch of them at one time.

In addition to what LGDB and Myeong said, it’s more like his GREEN skill, not his blue