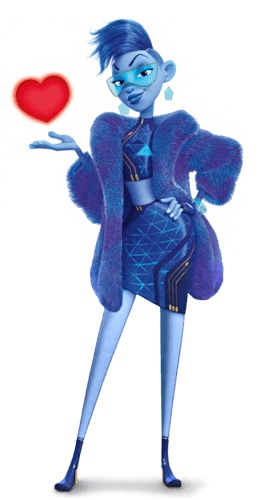 “Ha! That is what the internet was made for!”

The head of Buzztube who trends allies and dislikes enemies

Entrance: yesss walks into the battlefield with her phone

Victory: yesss does a cheerful dance

Defeat: yesss gets mad and crosses her arms

Passive: yesss uses two attacks depending on who yesss sees a video of her allies or her enemies

If she sees one of the enemies on her phone, yesss gets a digusted look her face and gives that enemy a thumbs down which prevents that enemy from using their white skill the first time the meter fills up.

Active: yess heals all allies per stack of “hearts” they have when yesss activates the move but she decreases the armor from enemies effected by being disliked by yesss.

Yesss throws 3 hearts at the ally who caused the most damage to enemies which gives that ally 3 stacks of “hearts” and cleanses debuffs from that ally as well.

Blue: drinks on the house

Yesss pulls out a drink and drinks it which heals herself for x amount.

Red: top of the buzz

Yesss now heals herself for every ally she gives stacks of “hearts” to.

Each time that yesss or an ally is healed, they gain a shield for x amount which lasts for 7 seconds

Yesss is now immune to charms for the first 4.5 seconds of each wave.

Looks great! Though it is kinda hard to see the skills color (white green blue etc) in future concepts can you add ** ** for the colors so it is easier to read?

I love how you added skills e.t.c

I love how you added skills e.t.c

That is what ever concept has