What is your current Arena lineup and why? Also let us know what combinations you are having most trouble with.

For me, I’m using a full Zootopia team, except for Judy which I swapped out for Jessie to add some extra damage. I also tend to sometimes swap her for Violet if I need shields to suppress some hard damage.

The combinations I have most difficulty with are teams that have a combination of Sulley and Mike together as they both have skills that are enhanced when they scare enemies.

I’m curious I just started but what does the scare debuff do exactly? 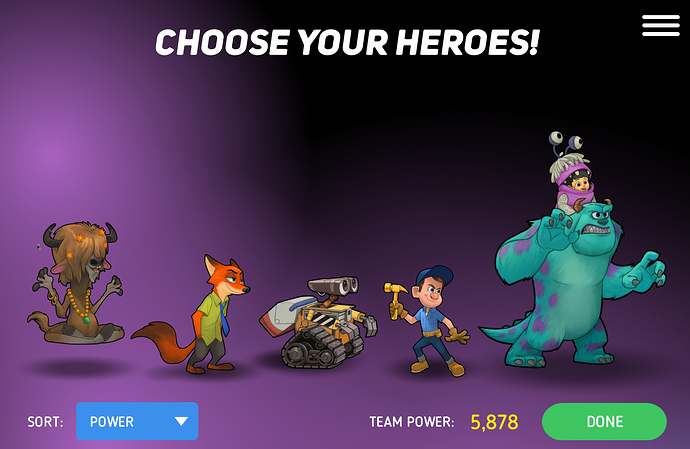 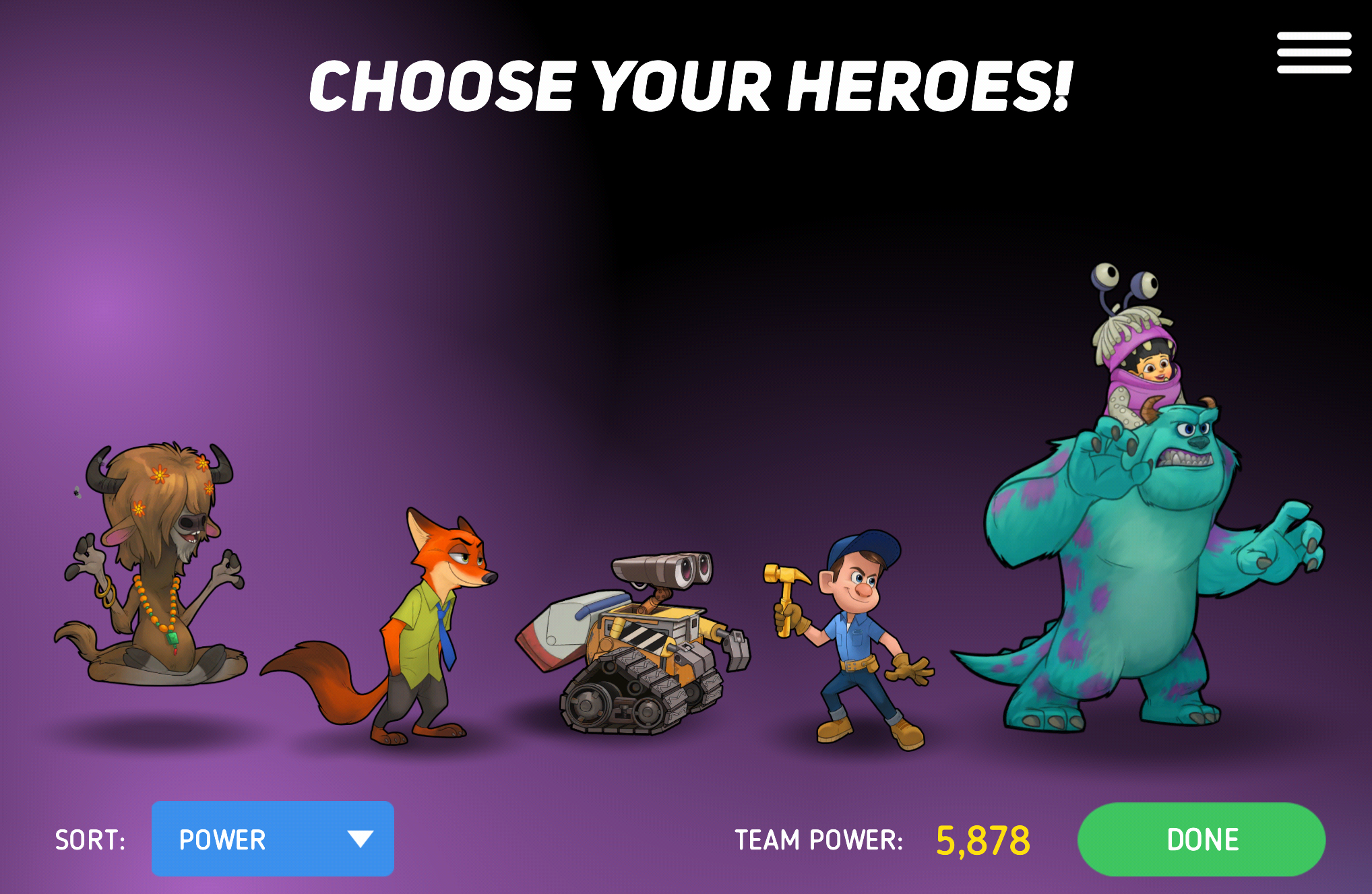 Woah, very nice lineup there Player_Hater! With Sulley in the front healing himself and Felix healing him up as well, you have a very strong frontline, and Yax becomes almost obsolete indeed. I would suggest swapping him for a high damage dealer. Mike works very well in sync with Sulley as they both scare enemies and get buffs from it. You could also go with Jessie as you have Wall-E who can freeze people long enough for Jessie to build up her active skill.

Here’s my current lineup. At the moment I’m level 52 and this team helps me to beat those nasty Sulley/Zurg/Mike combos in Arena.

This is my team on S4. Basically I’m experimenting to see which team can beat which lol. Its rough work being at the top.

I lose every arena battle even though it looks like I should win according to my power. What am I doing wrong? Any advice?

Such as the mentioned combo above to use Sully, Mike, and Zurg because they can “scare” the other team and they also deal different attacks that are categorized as “fantastic damage” which would guarantee critical hits

I dont have the lvl or the heroes

or ever the upgraded skills but i have a combo at my mind and i wanna ask if anyone with max character can test it , the combo is sully mike felix violet zurg i think that if you have violet purple and with the stun one friendship medal this will work very good 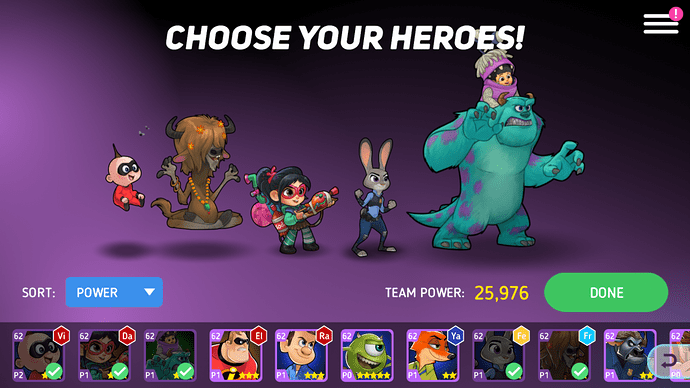 I think that jack jack is underestimated, i think he can do a lot of damge if he is purple, if you add nick then vanellope has no use is the only one real damage character and if you add judy he can complete support vanellope with attack spd only, i think that you should use another support/controler such as wall e or violet

@Musketeer can you test this line up and tell how it works ? sully mike felix violet zurg i think it can KO anything ,also you can use jack jack at mike or zurg space and tell me how it goes

I don’t have a goto one yet. I keep swapping them out and seeing how many defenses I get to see which one holds out best.

I have a main offense line that wins more than it loses, even against lines with more power against higher levels. But I’ll keep it to myself as nobody else seems to run it, and they will once they know it works. It’s a competitive game after all 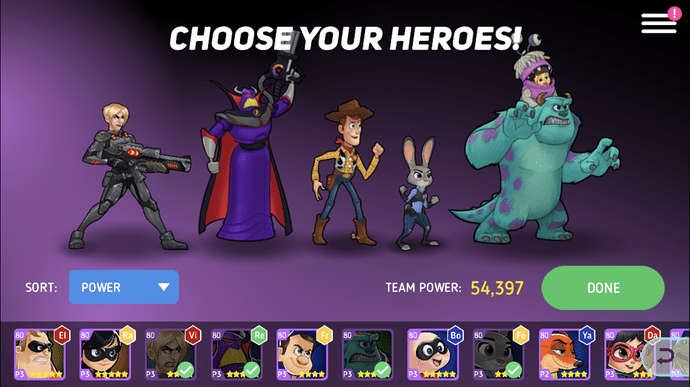 This is my current line up for arena. Unfortunately when I had originally started I was working on heroes that aren’t really as effective in arena anymore so my woody and Judy are further behind in rank and stars than I would like (and some of my other heroes of significantly higher power).

Ultimately I want to substitute calhoun out for mike but my mike currently is too underpowered to be viable in my lineup. For the moment though Calhoun’s violet disk is a great start to a wave and she has very high damage, she does not synergize very well though; not like Mike synergize with both zurg and sulley. As for Judy she is invaluable for her speed buffs that she gives at the start of a fight, she makes it so that you get a head start on your opponent, or if they are also using Judy that you keep up to speed.

Woody provides a bit of team sustain and a charm, but the biggest benefit is how he synergizes with zurg. If woody and zurg ult at the same time zurgs ult cuts through the enemy team like butter.

All in all I would recommend that when you are looking for strong comps in arena take a look at your ranking building and select ‘arena’ rather than ‘power’. Take a look at the top arena players on your server to get an idea of what heroes are on everyone’s roster, it will give you a good idea of how to build.

This is my line up yak, felix, dash, jessie, and tia dalma

it seems to do quite well with just about everything. I ended up beating a team 2,000 power points above me! I just unlocked walle so im thinking of swapping out tia dalma for walle

Not disagreeing, just curious on the reasoning behind Dalma > Walle? @UrD3ath?

Just what I’ve noticed looking at top players. Honestly, I assume the answer lies in the detailed stats and the silence/charm being very effective versus some of the strongest combos. Overall can survive while producing good cc.