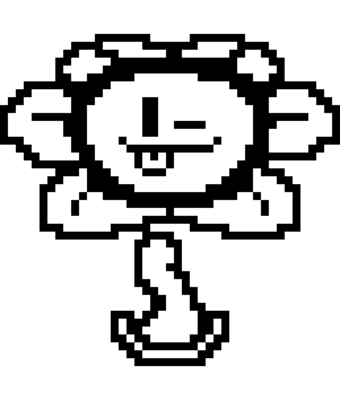 “why am I still doing this? Don’t you get it? This is all just a GAME.”

Entrance:flowey pops out of the ground.

Victory:flowey winks at the enemies.

Victory(as asriel dreemur):he shakes his head as he raises both his hands to both sides of his body.

Defeat:flowey gets a deranged look on his face and then turns into a lifeless flower

Defeat(as asriel):he crys as he transforms back into his original non-flower form

Asriel:shoots out a magic fire from his hand, deals x damage

Passive:flowey gains a stack of “soul” each time he defeats a enemy, flowey transforms into asriel dreemur when he gains 5 stacks of “soul”

Active:Flowey drops a bunch of nuclear bombs onto the enemies, dealing x damage to all enemies and deals continuous damage for 4 seconds.

when flowey transforms into asriel, he instead uses a powerful blaster that fires a charged beam at all enemies, dealing x damage to all enemies.

normal form:flowey uses a flamethrower to burn the nearest enemy, deals x damage to that enemy and deals continuous damage for 2 seconds.

asriel dreemur:asriel sends out a wave of stars at the enemies, dealing x damage to all enemies and silencing the two front most enemies for 3 seconds

As flowey:flowey captures the enemy with the most hp in a tangle of vines and drains their hp for 3 seconds in order to heal himself for x amount per second.

As asriel:asriel shocks the enemy with the most hp with a bolt of lightning, deals x damage and stuns the enemy for 2 seconds.

“Draining vines” now reduces armor from the enemy that flowey catches with his vines.

flowey gains a shield of x amount whenever he gains a stack of “soul”.

allies armor now increases gradually for the first 3.0 seconds of the round.

The stun from “Shocker breaker” now lasts for 3 more seconds and can break shields.