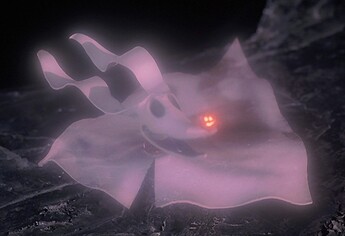 The Pumpkin King’s ghastly canine flies into the City, lighting others’ way to success with his glowing nose. Step aside, enemies, ‘cause there’s only room for Halloween Town’s creeps!
Trial Team: Yellow
Role: Backline Support
Stars:

Green Skill - Ghost Rush
Zero flies through enemies, stealing X reality from each enemy he passes through. Zero then gives the stolen reality to the ally with the least reality.

Purple Skill - Postmortem Loyalty
If Zero reaches 0HP, he splits his Skill Power and energy among all remaining allies. His armor is increased to X.

Red Skill - Through Thick and Thin
When Zero performs his “Use Your Nose” skill, he is immune to blinds for the rest of a wave.

Friendships:
Zero + Jack Skellington
Campaign: Man’s Best Friend - While traversing the City’s maze-like streets, Jack and Zero decide to run a pet shop. Of course, it’s a step up from hijacking an entire holiday, even though pets and customers are uneasy about Jack and Zero running the place. Eventually, the pets come to terms with the skeleton and ghost dog.
Disk: Heart of Gold
Disk Memory: While invisible, Zero gains X HP each time he is hit by an enemy skill that effects all allies.
Disk Power: Z Basic Skill power, Z evasion
Allies: Flik, Russell & Kevin, Rafiki

Zero + Pleakley
Campaign: a Missing Experiment - Zero stumbles into Pleakley, who is searching the City for one of Jumba’s runaway experiments. In pursuit of this crazy critter, the two follow its trail of witnesses to the Covered Market.
Disk: Caught Red-Handed
Disk Memory: Zero steals X HP from enemies each time he performs his “Ghost Rush” skill.
Disk Power: Z energy gain
Allies: Simba & Nala, the Sheriff of Nottingham, Finnick

Please do not revive dead topics like this. Thank you!