This is the newest Concept of mine and also my Halloween Concept! The best Disney Villain ever: Cruella de Vil! I hope you people like it! Please leave all comments and post your favorite villain. 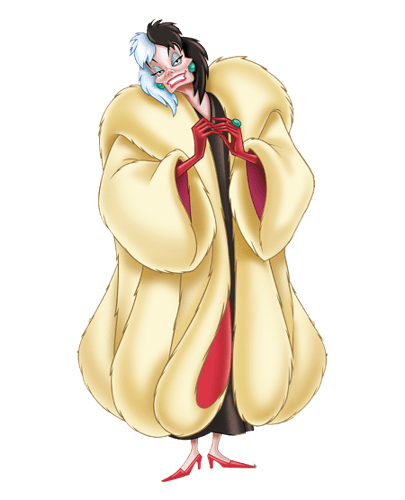 Fantastic Damage
Passive: Instead of a Basic Attack Cruella de Vil applies one Stack of Smoke to an enemy. Enemies take X Extra Damage from all sources per Stack of Smoke they have and are slowed by 50% for five seconds when they use their active skill.

Active: Cruella de Vil consumes all Stacks of Smoke blows a poisonous cloud of smoke on the battlefield that passes the enemies and deals X damage over five seconds to them.
Enemies with a Stack of Smoke take 100% more damage from this Skill.

Normal Damage
In the beginning of each wave Cruella de Vil drives her car through the enemies dealing X damage to all enemies and knocking them back. The three frontmost enemies are stunned for seven seconds and 25% of their Armor is stolen for ten seconds.
Cruella de Vil is untargetable while using this skill.

Fantastic Damage
Cruella de Vil takes off the telephone and cries in it silencing the three frontmost enemies for ten seconds, then throws it in the middle of the enemies dealing X damage to all and X Extra Damage to enemies with a Stack of Smoke.
The Silence has a chance to fail against enemies above Level X.

Purple: Chainsmoker
Every third Stack of Smoke now steals X Armor and Y Max HP from the enemy and gives it to Cruella de Vil.

Red: Fur Lover
A Stack of Smoke now has a 50% chance to remove a Stack of Hardy from the enemy.

Cruella de Vil heals with X HP per second for each Stack of Smoke on enemies.

How many points do you give me for the Cruella de Vil Concept?